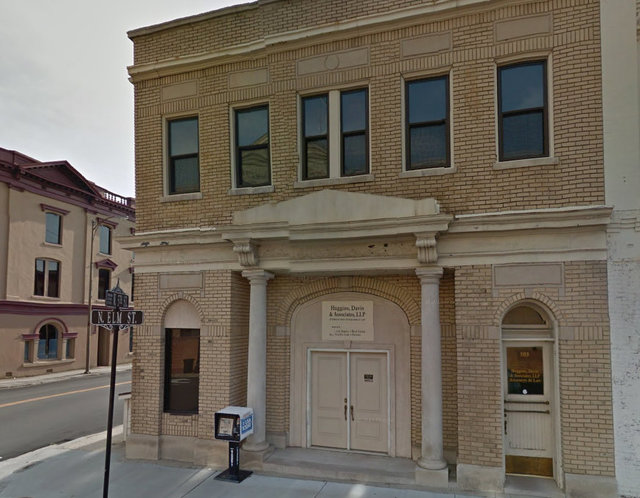 The Pastime Theatre was located in the McLeod Building in Lumberton, and opened on December 1, 1911. The building was Neo-Classical styled and a facade was constructed on the front of the building for the ticket booth and the theatre offices. The theatre did not have a marque.

The Pastime Theatre did not open in 1934. It opened on December 1, 1911 as the first theater in Lumberton built for photo plays and managed by Wade S. Wishart. (Though his obituary says the Pastime Theatre opened in 1910, there are no listings, mentions or bookings at the theater prior to the opening date in 1911.) The Pastime was remodeled soon thereafter celebrated another grand opening playing films such as “Birth of a Nation” and its sequel. It transitioned to a low cost theater during WW I Owner H.H. Anderson took over the theater in 1917 installing new Simplex film projectors.

Anderson sold out to Mr. and Mrs. J.W. Griffin in 1926 who sold to a fourth owner in 1929, Joe Caudell who installed Movietone sound with its first talkie with “Abie’s Irish Rose” May 24, 1929. The Carolina ownership, The Lumberton Theatre Company, took over the Pastime September 23, 1929 and with its Vitaphone sound system showed the “Jazz Singer” October 2, 1929 for its first Vitaphone screening in Lumberton. But by late November, the Lumberton Theatre Company rented the theater out for sporadic events including live singing, vaudeville and boxing and no longer used it for theatrical bookings. Obviously, the company worried about the onset of the Depression and its toll on Lumberton moviegoers.

Wishart who had managed the Lyric and Star and then would leave town only to return trying in 1931 in vain to re-establish the Pastime as a regular feature film location. (He would cashier at the Caroline and then on to run the Riverdale for seemingly ever and retiring at 80 back at the Carolina.)

The seldom-used Pastime was updated with RCA sound as it transfers from Lumberton Theatre Company in August of 1934 by the Anderson Theatre Circuit on a five-year lease. Anderson ran into major problems when it altered its balcony policies from all Indian to cater to the high number of American Indians in the area to an all African American balcony policy leaving out the Indians. In March 15, 1939 the Pastime had a grand re-opening as that year H.F. Kincey takes on both of Lumberton Theatre Circuit’s Lumberton holdings in the Carolina and Pastime on ten-year leases. That formation would be the Wilby-Kincey circuit which would steer the Pastime to its closure on March 25, 1949 going dark. Jimmy Adams purchases the building housing the theater on March 2, 1950 and apparently disassembles the theater starting with the lobby ending its cinematic service at just over 37 years.