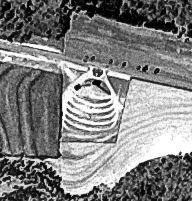 A lady at the local newspaper office told me that the Chattahoochee Drive-In was located east of town on US 90. It was operating prior to 1950. Later renamed Dixie Drive-In. She said that the theater was demolished years ago and that nothing remains; the current owners of the property constructed a wooden fence along the road. The back of the lot is just a few hundred yards south of the Georgia line.

Also owned by the Dunn Family.

The Dixie Drive In theatre was located on highway 90 in Chattahoochee on the eastern outskirts of the town. It was owned by C. S. Dunn of the Dunn Family theatres circuit. The drive in was surrounded by lands owned by Mr. Dunn. He also owned the downtown Gibson Theatre. He lived on top of a hill back of the drive in and you could look down and see his drive in from his farm. The drive in was no where close to the GA/FL border. He also raised cattle. When cinemascope came out in the fifties, he was in the process of remodeling his screen and went ahead and expanded it to accomadate cinemascope. In the late sixties, when drive in business was dimishing, he took down his screen and made a truck stop (Hwy 90 was a major truck route). He turned the concession stand into a truck stop resturant and made the old projection booth a showers for truck drivers. He then divided up his land east of the drive in into residential lots and sold them to people who worked in Tallahassee Fl. He then added a service center with gas pumps. When interstate 10 opened below Chattahoochee, it took the trucks off of Hwy 90. He then tore down the truck stop and sold the land for a large home. He always seemed to be one step ahead. Unfortunantely no pictures can be found of the Dixie Drive In. Mr. Dunn’s daughter is still around, but she has been unable to come across any.

The Dixie probably opened around 1950 (about the same time as they built the Cairo Drive In Theatre in Cairo, GA.) My 1949 Film Daily Yearbook does not list it. It closed in the sixties. It was a truck stop when I was stationed in Pensacola Fl in 1969 as I used to stop by and see Mr. Dunn. I don’t know who Shellgrove was, but my 52 and 56 directories list C S Dunn as the owner.