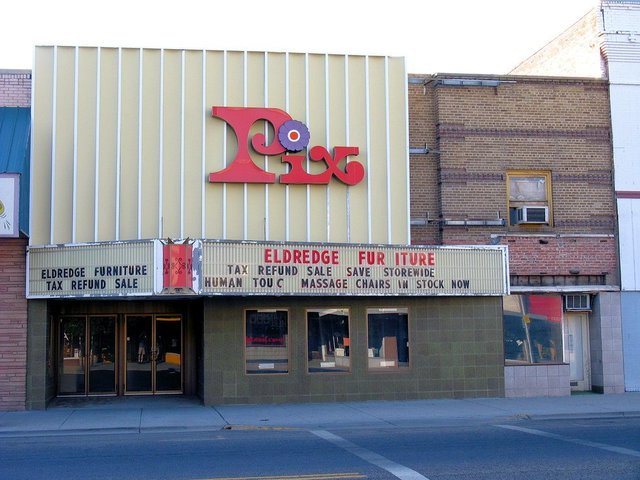 The Argus Observer lamenting on the closing of the Pix Theatre on April 5, 2001 said that when it was built it was considered the most substantial and beautifully appointed theatre in the Intermountain area. Its premiere attraction on September 19, 1937 was the Jack Benny-Martha Raye film, “Artists and Models.” The opening advertisement touted a 15x20 foot screen and an upstairs lounge with heavy carpets, upholstered chairs, floor to ceiling mirrors and indirect lighting.

The theatre was fortunate enough to have only three operators during its 64 years. Jim Potter, who was the original 1937 manager, sold it to Jerry Ross and his partners in 1965 and In 1997 Ross sold it to manager Andy Shimojima.

The Pix Theatre managed to hang on for nearly a year and a half after the opening of Ontario’s Reel Theatre 8 in November of 1999. It final presentation was Sean Connery in “Finding Forrester". At the time of its closing the Centre Twin, a few blocks away, was still open and Shimojima said the town wasn’t big enough for 11 screens.

Local businessman, David Eldredge, who expanded his furniture store into the space, said that the marquee would remain for advertising purposes and he planned to keep some of the theatre style while converting it to 1,300 square feet of showroom. His biggest job was leveling out the six-foot drop in the slanted floor.

Nostalgic locals were able to buy the theatre seats at $12 apiece and his son Michael insisted on keeping the classic popcorn popper and the vintage movie posters lining the staircase.

There furniture showroom is now closed off from what remains of the Pix. From what can been seen through the dingy glass doors of the former theatre is very limited.