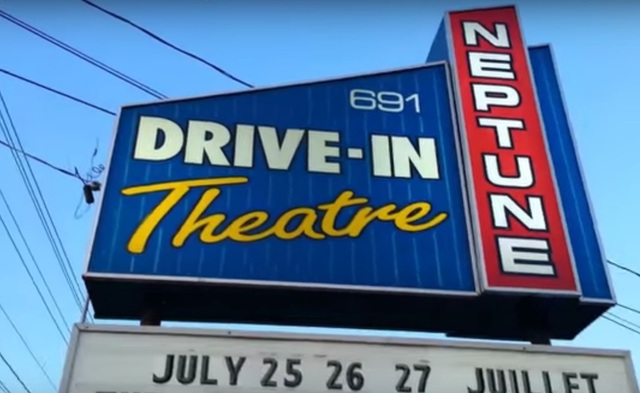 The Neptune Drive-In opened in the early-1960’s with a car capacity listed at 350 cars. The drive-in closed in 1985 but was reopened again in 1990. It is operated seasonally from May thru September showing first run attractions.

A Times & Transcript article, copied into notes on a 2008 petition at GoPetition.com, said that then-owner Gilles LeBlanc’s father opened the Neptune in 1964, but Gilles was closing it and putting it up for sale. It didn’t mention the earlier closing but said “the drive-in started to fall on hard times in the 1980s”.

The Globe and Mail reported that in 2010, “a local business person bought the property and approached (Jeff) Coates with a suggestion to lease the drive-in business. After discussing the opportunity with (Robert) Farquharson, the duo decided to team up and leased the theatre in 2010.

“After a lapse of four years, the drive-in opened for a 17-week period in the summer of the same year.”

The Neptune’s web site was active in the summer of 2010, so we know it had been revived by then. The site had a note in June 2013 that the drive-in had gone digital.

A 2013 Global News video with Coates said the “40 year old” Neptune opened “in the early 70s,” which would account for the missing IMPA listing.