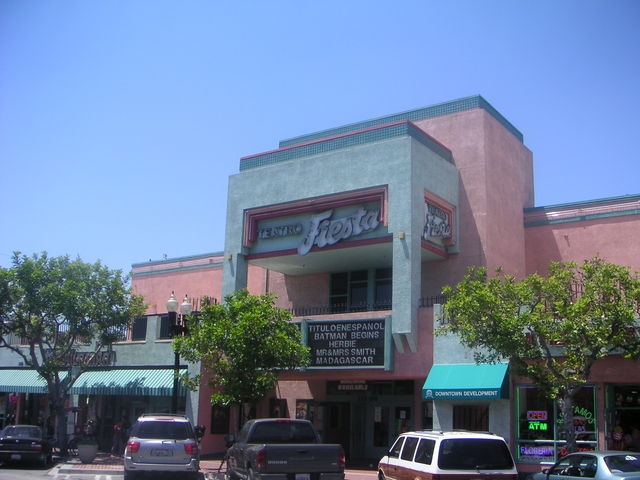 The Fiesta Twin Theatre opened in 1988 as part of the Fiesta Marketplace. It has always shown mainstream American movies with Spanish sub-titles. The theater manages to get in showings of four different movies a night by showing a movie one time in the two auditoriums.

Downtown Santa Ana has a history of showing Spanish-language films. Down the block and on the other side of the street is the long-closed Princess Theatre, which showed Mexican films in the 1950’s. That would be real Mexican films, made in Mexico and with Mexican stars. The nearby historic Yost Theatre also at one time had a Mexican film policy. You could say that the Fiesta Twin Theatre has a rich history behind it also. Metropolitan Theatres, the old Los Angeles chain, which has been around since 1923, was the developer. In the 1950’s Metropolitan ran at one time 12 theaters in Los Angeles. Yes, they are still around with 18 locations in four Western states and British Columbia.

In July of 2011 it was announced that the name Fiesta Market Place would no longer be used to identify the shopping area. Beginning with the reopening of the Yost Theatre as a nightclub in August the area will be called East End to reflect a changing trend. The Orange County Business Journal says that in recent years Hispanic shoppers have moved upscale and have been wooed away from Santa Ana’s downtown by Wal-Mart, Target and even the Irvine Spectrum. The Fiesta Twin Theatre’s website say: $5.00, All Seats, All Shows, Every Day. It was closed January 5, 2014.