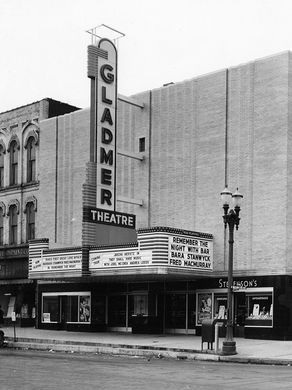 Opened as Buck’s Opera House in May 1873 it was designed by architect E.E. Myers. It was renamed Baid’s Opera House in 1890. It became the Gladmer Theatre in 1910 when it was remodeled to the plans of architect Fuller Caflin. It was closed in May 1939 with Dorothy Lamour in “St. Louis Blues” and was gutted.

The ‘new’ Gladmer Theatre was designed by architect Elmer Keeler out of the Howard C. Crane firm. It was opened October 12, 1939 with Madeleine Carroll in “Cafe Society”. Operated by the Butterfield Theaters chain, it was closed March 25, 1979 with John Houston in “The Bermuda Triangle”. The building was put up for sale, but there were no takers until 1984 when it was sold and demolished.

Does anyone remember the Plaza Theatre in Lansing? It was located about a block south of the Gladmer on N. Washington Street. In the late 40s and 50s it was somewhat rundown and showed mostly B-westerns and serials. —Billy Boy

Bill Lyons, the “Epicure Tea Shop” is listed at 221 N. Washington Ave. in the 1945 through 1966 Lansing City Directories. It may have been listed there before 1945 also, I don’t have those books handy.

1982 picture of the Gladmer after it closed:
View link

From the early 1940s a postcard view of the Gladmer Theatre in Lansing.

I was raised in the Gladmer theatre practically from birth until 1971 when my father George Hibblen, the projectionist there passed away.He also worked the Michigan downtown when Mr Butterfield needed him.Alot of memories running around in there, backstage, all of the knooks and crannies were explore.The projection booth was pretty cool too.George Hibblen was a great guy!:)Patti

Volume 4 of Charles Moore’s 1915 “History of Michigan” has a biography of architect Fuller Claflin, and names six theaters in Michigan that he designed, the Gladmer among them. This had to have been the remodeling that took place about 1910, as the original architect of Buck’s Opera House (opened May, in 1873) was E.E. Myers. I’ve been unable to discover who was the architect for the late 1930s remodeling.

Following a salvage sale, the theatre was ripped out in May of 1939 – minus perhaps two walls – and replaced by the new Gladmer Theatre. That theatre opened October 12, 1939 with “Cafe Society” for the Butterfield Circuit. It ended after a 20-year lease lapsed on March 25, 1979 with “The Bermuda Triangle.” The theatre was offered for sale in 1979 remaining empty until finally sold in 1984 which led to its razing.

It should be mentioned that the top floor was removed for the 1939 renovation. Multiple images here on the Water Winter Wonderland website.