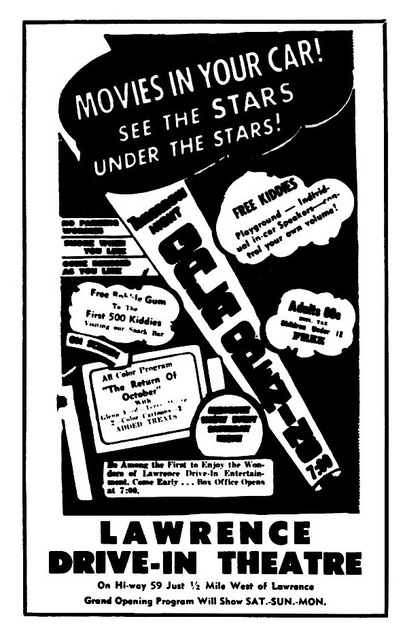 The Lawrence Drive-In opened May 27, 1949, featuring the 1948 movie “The Return of October” with Glenn Ford & Terry Moore. It was built by Commonwealth Lawrence Theatres on land leased from Ralph Puckett. Commonwealth also operated the Patee Theatre and Granada Theatre, both hard-tops at the time. Eventually they took over the Sunset Drive-In. Initially the parking ramp held 500 cars with in-car speakers and had a childrens' playground in front of the screen tower. Since the Lawrence Drive-In was not located with a road frontage, a 300 ft. driveway going south connected the theatre area off of West 23rd Street.

Throughout the 1950’s urban sprawl started to move in and the Lawrence Drive-In closed September 1961 for the winter, and never reopened. The property was redeveloped in retail and housing use.