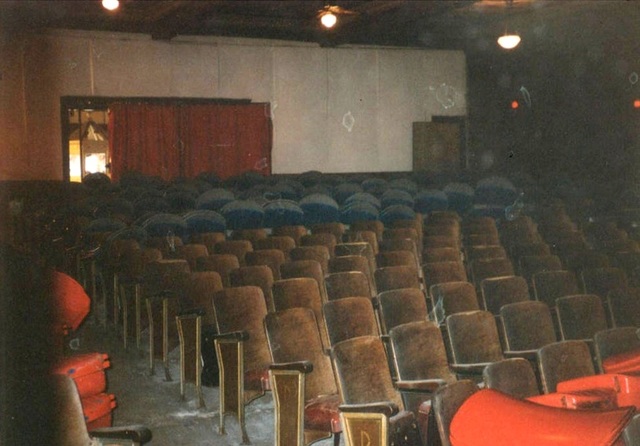 Opened in 1921 as the Columbia Theatre by Gottlieb and Emma Herman and Richard Beer, the theater was purchased by Louis Damm and opened as the Damm Theatre on February 22, 1922. A dance hall was on the second floor of the theatre building.

The Damm family settled in Osgood, Indiana having emigrated from Bavaria in 1868. The Damms owned an earlier Damm Theatre in Osgood which they opened in 1914, nearly across Buckeye Street from the present Damm Theatre. When the Damms purchased the Columbia Theatre, the Damm name was transfered to the new Columbia.

The theater was used as a community theater in addition to its use as a first run theater. During the silent film days, a piano-console Wurlitzer player organ was installed. In the depression, the organ was reposessed by the area Wurlitzer agent J. W.Whitlock of Rising Sun, Indiana. The Damm Theatre dance hall also contained a Wurlitzer orchestrion for dance music.

The theater was run by the Damm family until 1989 when Viola Damm passed on. Other than the removal of the organ, in 1989, the Damm Theatre was magnificently intact right down to the crushed red velvet and electrified gas lamps on the walls. Viola Damm was a delightful lady who made the best popcorn east of the Mississippi! She was highly apologetic about filling the piano pit with concrete:

"Since we were not likely to need the pit anymore, we filled it in a year or two ago."!!

The Damm was reopened for a period, and then closed again. During a visit to Osgood in 2001, the Damm Theatre appeared to be closed, but the building was certainly being mantained. The building had been painted and the truck trailer-damaged marquee had been repaired.

In June 2008, the fourth stage of renovation was completed with the lighting of the marquee.

The Damm officially reopened on December 29, 2008 and is now open on Friday, Saturday and Sunday screening recent films. The theater is equipped for the hearing impaired.

Another article can be found here: View link

Also run by that Bavarian family next to their theater was the Damm Bakery and the Damm Good Pizza Parlor.

Never heard of the Damm Good Pizza Parlor, but it must have come along a long time after the original Louis and Viola Damm ran the new Damm/Columbia Theatre.

The entirely new interior of the Damm today has nothing of the original interior. The exterior is largely as it was with a magnifcently restored marquee.

Here is a website showing various stages of the gutting of the original Damm Theatre and its replacement with a modern, non-historic interior.

The Damm Theatre restoration has been completed and re-opened December 29 2008 with their first movie presentation. The new DAMM Theatre website is at:

Come see us at the Damm Theatre!

How many times did you say,“I am going to the Damn Theatre to finish those reports my box office girl didn’t do!”

Nice-looking theatre! What happened to the Wurlitzer orchestrion that was in the dance hall adjoining this theatre?