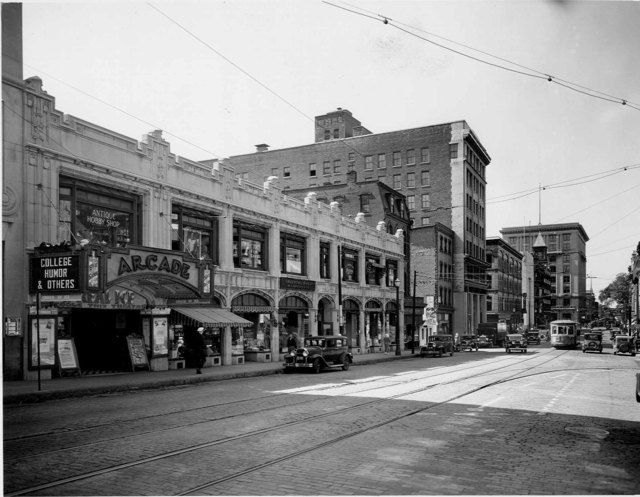 The Arcade Theatre was opened in 1931. It was operated for years by Western Mass Theatres Inc. (Samuel and Nathan Goldstein). Sometime in the 1950’s it was leased to B. & Q. Assocates and became a showcase for long run spectacles, such as "Spartacus" which had its western Massachusetts premiere at the Arcade Theatre. It was the only downtown Springfield theatre to feature films in 70mm projection.

In 1971, the Arcade Theatre was closed. It was demolished in November 1972 in connection with the construction of the Springfield Civic Center, which required that Dwight Street be extended across State Street straight through the theater’s site.

I worked as a projectionist here its last couple years. They had very good equipment. In the early 60’s they put in 3 projector Cinemiracle for WINDJAMMER FOR A FEW WEEKS.

The Arcade Theatre was located at 163 State Street.

The Arcade opened in 1931 as a legitimate movie theater rather than a stage theater. It had no balcony and 1,060 seats on it’s main floor.It had a tan colored curtain in front of the screen. It’s marquee was red and hung over the sidewalk on State St. It closed in 1971 and was demolished in November, 1972

I remember sometime during the mid ‘50’s this theater closing down for a week during extensive upgrading. Place was completely painted (green), new recessed light fixtures replacing the old chandeliers, carpeting, new screen and curtain plus a new marque. This probably occurred after B & Q took over ownerhip. As young teens, my buddy and I naturally had to be the first patrons for the reopening. Don’t recall the movie, but do recall seeing “Around The World In 80 Days” at a later time.

Born in 1949, my visits were late 50’s and 60’s. I was awed by the 70mm format that only the Arcade supported during that time period.

The theater had plain and simple decor with two aisles and no balcony. The facade of the theatre was simple, dominated by the signage.

It was in the downtown area, just down the hill from 4 of the city’s 5 high schools and the City Library. Limited parking, but access all of the bus routes.

Other downtown theaters of that era were The Capitol, The Paramount, Lowe’s Poli, and the Bijou. Several smaller theaters were in non-downtown areas such as the Bing (Forest Park section) and another in Indian Orchard section.

During the 30’s or 40’s, Tony the Barber, a hero of the South End, used to rent the Arcade for occasional Saturday afternoons. He would invite all the neighborhood kids to come for a free matinee complete with prizes. I know a man who won one of those prizes: a baseball glove.

My grandfather, George Coleman, was a manager at the Arcade in 1939. He also opened the Paramount in Brattleboro in the late 1930s and then managed the Calvin in Northampton for several years.