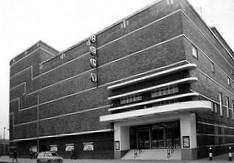 Located on Broadway, next to the (now demolished) Palace Theatre, the stage end and dressing rooms were at the apex with Cattle Market Road. The Embassy Theatre was built by Peterborough Amusements Ltd. (Bancroft family) as a live theatre, opening on 1st November 1937 with the musical comedy “1066 and All That”, produced by Emile Littler.

Designed by noted cinema architect David Evelyn Nye, the theatre was equipped with projection equipment from the start, but this was hardly ever used until many years later. There were 754 seats in the orchestra stalls and 730 seats in the steeply raked circle. The proscenium was 44 feet wide and there were 14 dressing rooms on 4 storeys. Many famous stars appeared at the Embassy Theatre, including George Formby, Laurel & Hardy, Ivor Novello, Mantovani and His Orchestra etc.

In 1954, the Embassy Theatre was equipped with CinemaScope and 4-track magnetic sound, and opened with “The Flight of the White Heron” (a documentary film about the Royal Tour) on 28th June 1955. This was followed by a two week run of “The Robe”, and other early 20th Century Fox CinemaScope productions.

Live shows returned from 27th December 1955 with the annual pantomime, a production of “Robinson Crusoe” which ran until 19th February 1956. Stage shows starring singer David Whitfield and Billy Cotton & His Band followed, then films returned from 18th April 1956 with Marilyn Monroe in “There’s No Business Like Show Business”. Stage shows continued for several more years during the winter period.

The Embassy Theatre was taken over by the Associated British Cinemas(ABC) chain on 4th April 1963. It was re-named ABC from 23rd April 1965. The ABC was closed as a single screen on 24th January 1981 with Clint Eastwood in “Any Which Way You Can” and the theatre was converted into a triple screen operation. Re-opening on 14th May 1981 with Christopher Reeve in “Superman II” in the 668-seat ABC 1 (former circle), Donald Sutherland in “Ordinary People” in the 290-seat ABC 2 (former rear stalls) and Goldie Hawn in “Private Benjamin” in the 150-seat ABC 3 (former rear stalls). The stage facilities were retained, using the ABC 1 seating area.

Taken over by the Cannon Group in 1986, it was re-named Cannon. When plans were announced that Peterborough was to get a new Showcase multiplex, the Cannon was closed on 25th November 1989 with “Shirley Valentine” being the last film to play in Cannon 1, which was followed by a 6 days run of the Peterborough Musical & Dramatic Society production of “Broadway Mad” live on the stage. Cannon’s 2 & 3 closed with “Pet Cemetary” and “Two Moon Junction”.

The building then stood empty and ‘For Sale’. It was purchased by Granada, and converted into a Granada Bingo Club, but this only lasted from 1990 until 1993. The building was again put up ‘For Sale.

More photos of the Embassy here:–

VIEW ACROSS THE ROOF TOWARDS THE STAGE TOWER

I have a picture of the of the stage. My late Mother put a load of my photos in a safe place.. Will load when I find them…

There is much additional history of the Embassy/ABC/Cannon Peterborough on this webpage as well several pictures and memorabilia (scroll down a bit past the information about the Hippodrome/Palladium/Palace.