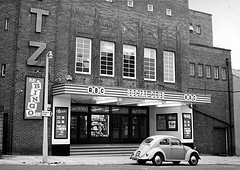 Located in Hyde, Cheshire, today part of Greater Manchester. The Ritz Cinema was a scheme planned by the Union Cinemas chain, but opened by Associated British Cinemas(ABC) chain, as they had taken over Union in October 1937. The Ritz Cinema was opened on 21st February 1938. The facade was in brick, and had a square tower on the left-hand side with the name RITZ spelt out vertically in huge letters down the tower. Inside the auditorium seating was provided in stalls and circle levels. There were decorative back-lit grilles on each side of the proscenium opening.

It was closed on 13th July 1968 and converted into a bingo club. It was demolished in 1981, and an Iceland supermarket now stands on the site.