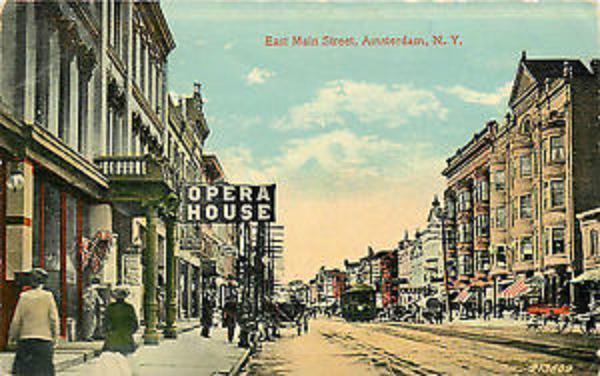 The Amsterdam Opera House was opened prior to 1892. It was listed in the 1914-1915 edition of American Motion Picture Directory and had been closed by the late-1930’s when it was converted into a department store.

There is an Opera House listed under Amsterdam NY in the 1897-98 edition of the Julius Cahn Official Theatrical Guide. No address is given. George McClumpha was Mgr and it had 1,300 seats. The theatere was on the ground floor and had both gas and electric illumination. The proscenium opening was 36 feet wide X 29 feet high, and the stage was 40 feet deep. There were 7 in the house orchestra. There were 2 daily newspapers and 4 hotels for show folk. The 1897 population of Amsterdam was 25,000.

The Amsterdam Opera House is on a list of theaters designed by Leon H. Lempert & Son that was published in the 1906-1907 Cahn guide. I haven’t been able to establish a time line for it, but the theater was in operation by 1892 and the building had been converted into a department store by the late 1930s.

The Neff Opera House was built in 1880, construction beginning on April 28, according to an article in the March 23, 1944, issue of the Amsterdam Evening Recorder. The theater suffered a major fire in 1896, which the May 22 issue of The Brooklyn Daily Eagle reported had done $30,000 of damage, with $5,000 dollars damage to the adjacent Warner Hotel.

Leon H. Lempert was designing theater auditoriums as early as 1880, though he billed himself as a scenic artist rather than an architect, but he didn’t establish his architectural firm until 1885, so I don’t know if he designed the Neff Opera House of 1880, its replacement of 1896, or both. He must have designed the rebuilding at least, or it wouldn’t have been on his 1906 list.

The Opera House was closed in 1925 and converted into space for M. Lurie’s Department Store. It had last been operated by the Keith circuit, and was apparently last called the Amsterdam Theatre. An article about the project appeared in the May 1, 1925, issue of the

“Lurie Company Begin Reconstruction of Building of Which It Has Long Lease.

“Contractor McGibbon today began tearing out the interior of the Amsterdam theatre, the old opera house on East Main street which will be remodeled into a department store for M. Lurie & Co. The Keith interests, lessees for several years, this morning turned over their lease to the Luries, who about a year ago secured a lease from the McClumpha estate for 50 years. This lease includes the entire building, Warner hotel, theatre and stores, the occupants of which have since been the tenants of the Luries, now located on the corner of East Main and Railroad streets in the Corey building, over the ownership of which there has been much litigation between Edward C. Klapp and Mrs. Catherine Dealy.

“The last decision of the courts in this matter declared that lease issued to the Luries by Mrs. Dealy to be void. At the time that they leased the McClumpha building it was stated that eventually they would remodel it for a store on a larger scale than their present building, and it is this work that is now in progress.”Vintage photos of the Warner Hotel and Opera House Block show a four story building in the Second Empire style, with the fourth floor under a mansard. The Opera House abutted the hotel, which was on the corner of Hamilton Street, but the modern building on the Opera House site does not (the hotel building has lost its fourth floor but is still there.) The modern building is not deep enough to have housed the theater, so the auditorium at least, and probably the entrance building as well, has been demolished.