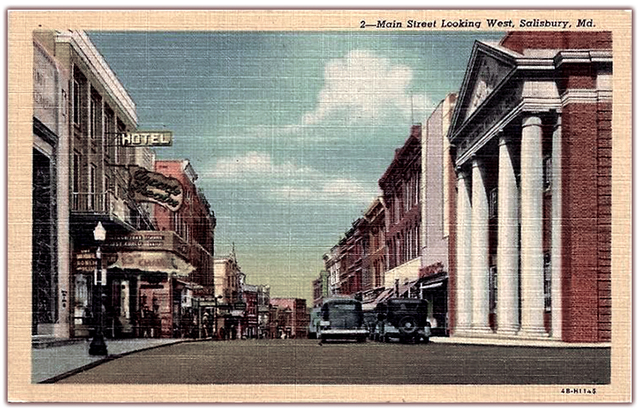 From the early 1930s a postcard view of the Arcade Theatre in Salisbury.

The June, 1914, issue of The Carpenters Trade Journal said that a three-story theater was to be built for the Arcade Theatre Co. in Salisbury. The project was designed by Philadelphia architects Hoffman & Henon. The lot was 174 feet deep, so the theater must have extended all the way through the block to Camden Street.

This page at the Salisbury News weblog indicates that the Arcade Theatre was on the south side of W. Main Street a few doors east of the Ulman Opera House.

The postcard view Don Lewis provided shows the theater almost directly across the street from the building with the portico which still stands at the northwest corner of St. Peters Street. The Arcade Theatre itself has been demolished, one of several Salisbury theaters destroyed by fire, though I don’t know what year the Arcade met its end.