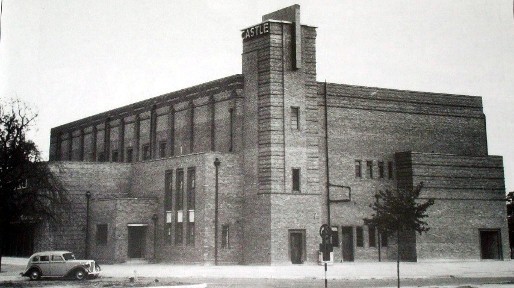 Located in Castle Bromwich, Warwickshire which today is part of Greater Birmingham, on the corner of Chester Road and Timberley Lane. The Castle Cinema was built and owned by Harry Dare, who also operated the Atlas Cinema, Stechford, Birmingham. The Castle Cinema was opened on 31st August 1939, just days before the outbreak of World War II. The opening films were Lewis Stone in “Out West with the Hardy’s” and Eleanor Lynn in “The Magician’s Daughter”. The supervising architect was Ernest S. Roberts of the architectural firm Satchwell & Roberts. The exterior of the building was in an Art Deco style, while the auditorium was lavishly decorated in a Tudor style. Seating was provided in stalls and circle levels. It had a 40 feet wide proscenium. The cinema also boasted a cafe and dance hall attached.

The Castle Cinema was booked and managed by the B.T. Davis circuit. By 1951, the cafe had become a popular milk bar. The Castle Cinema was closed on 26th May 1963 with Natalie Wood in “Splendour in the Grass” and John Ireland in “Return of a Stranger”. The building was demolished and in 2010, a Tesco Metro supermarket and parking lot stand on the site.