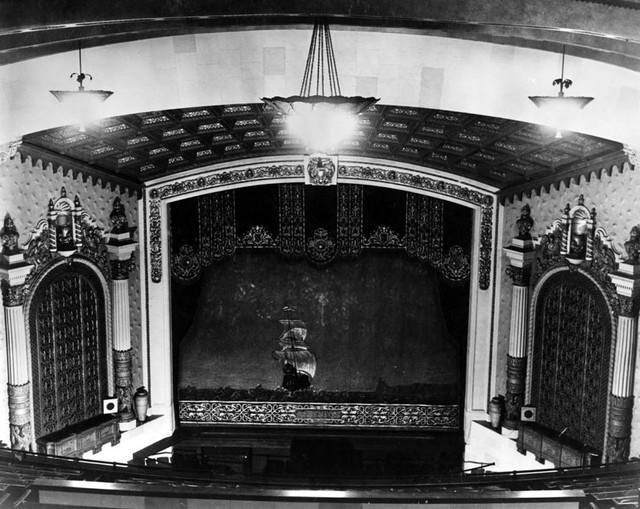 Opened as the New Peninsula Theatre on October 12, 1926, it was built for and operated by the Peninsula Theatres Company chain. It lit-up downtown with a 3,500-bulb marquee. It was equipped with a Robert Morton 3 manual 13 ranks theatre pipe organ. It was renamed Fox Burlingame Theatre on August 16, 1954. The organ was removed from the theatre in 1958 and installed in the Marin Pizza Pub, San Rafael, CA.

The Fox Burlingame Theatre was closed in 1974 and was destroyed in 1975, being replaced by a shopping mall.

The architects were Weeks & Day, who also designed the California (Fox California) currently being restored in San Jose.

For many years, the theatre’s roof featured a two-sided lightbulb sign, with incandescent fireworks, similar to that which still survives atop Oakland’s Grand Lake theatre.

One of my dearest friends, since passed away, started his movie
theater career as an usher at the Fox Burlingame. He told me the
stories of packed auditoriums of up to 2000 seats! Many times
the lobby and upper stairwells would be full of patrons waiting
for the next film to end before they would rush in for their
seats. I asked him, “Did ushers ever pick up trash and papers
between shows?” He said “Impossible, the shows were continuous
pretty much without much of any intermission.” His name was
WARD STOOPES who in later years became in independent movie
theater owner and operated several houses in San Francisco
including the YORK and many others during the 60’s and 70’s.
His last running venue was the old ENCORE THEATER located
around the corner from the Fox Burlingame. It was also run
in its early years as a FOX WEST COAST THEATER – but with
secondary features and under a different name.

The Fox Burlingame Theater (formally Peninsula Theater) was closed in 1974.

The Peninsula Theater opened on 12th October 1926. On screen was Norma Shearer in “Upstage”. Charlie Chase appeared ‘in person’ and the Robert-Morton theatre organ was played by Elbert LaChelle and Elmer Vincent. Milt Franklin and his “Musical Aristocats” were the house band.

How well I remember Ward Stoopes, he was a true showman. During the 70’s, he was working for National General Theatres in the maintenance dept. He and Marvin Atkinson did all the theatre maint. for the SF/Bay Area NGT. I was managing the Fox Skyline at the time. Ward and I became such good friends. At the time, he was struggling to keep the Encore Theatre in Burlingame going. He eventually had to close it and was he heartbroken. I lost track of Ward after I left the Fox in 75. Was so disturbed to hear he had passed away. He will always remain in my thoughts.