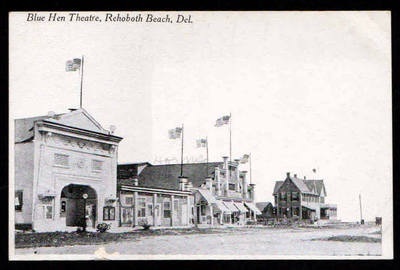 Opened as the Blue Hen Theatre in 1916. It was named after the state bird. The theatre was enlarged and updated several times. It was considered ‘The’ movie theatre in Rehoboth Beach for many years. During the 1950’s through 1960 the theatre went on a downhill trend.

Then in 1962 it received a complete remodel including a new facade and at that time it was renamed the Beachwood Theatre. I couldn’t find a closing date but the theatre has been converted to retail.

. . . and while I’m here, does anyone know in what year the Beachwood Theatre closed?

My family visited Rehoboth Beach August 12-15, 1964. I think the Beachwood was showing “The Unsinkable Molly Brown” with Debbie Reynolds and Harve Presnell. I wanted to see it but was told “we’d see it when it came to the local theater at home,”

My family used to go to Rehoboth Beach and I remember this theatre being open through the 1980s. In the 1980s, it having a red brick façade. It showed two movies at a time, in the 1980s. They scattered the show times to show two movies on one screen. The entrance was centered in the façade, not off to one side like it is today.