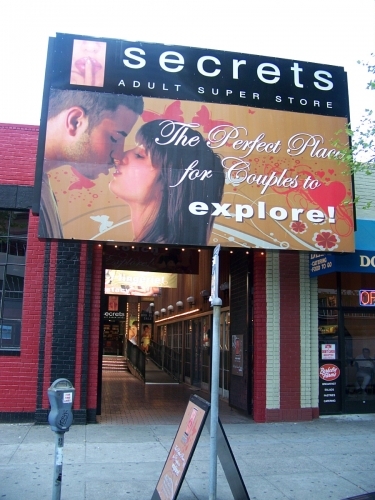 Opened as the Cinema 3 Center on April 19, 1972 with “Klute & "Summer of ‘42” in sacreen 1, “Dirty Harry” in screen 2, “Hot Rock” & “Butch Cassidy and the Sundance Kind” in screen 3. It became the Jack London Square Cinemas in the early-1970’s (not to be confused with the current Jack London Stadium 9, on Jack London Square a few blocks away). It screen sub-run double bills and occasional adult product.

It was later renamed Xanadu, and two of the screens showed adult features, while the other screen was converted into a peepshow booth boom. In recent years it has been renamed Secrets Theatre, continuing the same policy. It was closed in early-August 2016.

The Secrets Jack London theatre and sex arcade shut down permanently early in August 2016. The reports are the entire block will be cleared and condo/apartments will be built there.

The closing of the theatre ends a long tradition of casual sex in East Bay auditoriums showing pornography which began as a commom phenomenon in the late 1960s and peaked in the mid seventies when there were around a dozen such theatres in the east bay. Apparently now the closest thing is the bay men’s bath house, no venues for women and hetero-couples

Architecturally it is no loss.