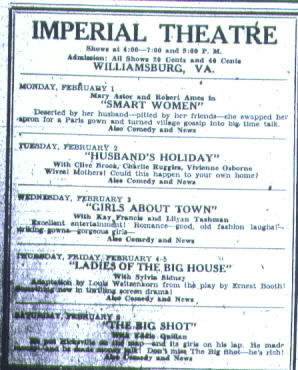 Located on the north-west corner of N. Boundary Street and Prince George Street. This is the second Imperial Theatre to operate in the town, the other being located on Duke of Gloucester Street which closed in early-1932. This New Imperial Theatre was opened on March 4, 1932, but closed in March 1934.

It was converted into offices and apartments.

One of the photos in the archives is dated 1928.

It would be helpful if CT had an exact address, more photos, both inside and out, and more info.

This movie closed in 1934 and the building was converted into offices and apartments. That is what it is today. It is a couple blocks off Duke of Gloucester Street. The New Imperial was built in 1932 as a result of being forced to move due to restoration in Colonial Williamsburg. It closed in 1934 because the area was unable to sustain two theaters – with the other theater being the Williamsburg Theater in the restored area. When it closed, it was converted into stores on the ground floor and offices, apartments and suites in the upstairs.