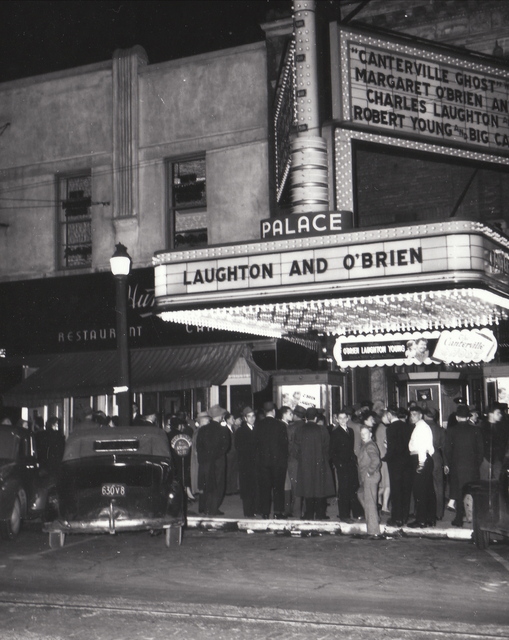 The Pantages Theatre was located in downtown Hamilton, Ontario. It was opened on October 31, 1921. It had one screen and a giant stage for live shows. It originally had room for 3,400 patrons. In 1927 it was renamed Palace Theatre. It closed as a movie theatre in fall of 1972.

Brian Morton: I am looking for history of Hamilton Movie Theatres. Contact – . Nabes

This theater is one of the city’s biggest and saddest losses. It was once considered to be the civic auditorium/theater, but they opted to build Hamilton Place instead. Idiots. HP is an architectural eyesore. You can see in the archive photos just how amazing this place was. If you’ve seen the Pantages/Canon in Toronto, the Pantages/Palace was very close in size and design. And “Palace” was a very fitting and descriptive name.

If you go to the Century listing, turn the Google street view across the street, and you will see the parking lot where the Palace auditorium once stood. The main theater entrance was on King Street. Like the Capitol, the building basically housed the ramped hallway entrance, which rose from street level, up to and over the alleyway and into the main theater building. An archive photo shows the entrance facade and marquee. Another is a shot from the lobby and down the entrance hallway. The box office is in the middle, with daylight through the doors on either side.

The auditorium was built on the north side of the alleyway, on the King William Street land. Both the auditorium and entrance building were demolished. The building on King Street is an entirely new structure, and now houses the Sushi Star restaurant. The auditorium is a parking lot. That’s right…they paved paradise, put up a parking lot…everybody sing!

This reminds me of the movie called “Rosie!” (Universal, c. 1967—never on video). Rosalind Russell plays Rosie. She has money and her kids/heirs can’t wait to get their hands on it. Sandra Dee is her grand-daughter (I think—I saw it 30+ years ago). She’s the only one that “gets” her. Anyway, Rosie decides to buy this old theater—for $2.5 million. She explains to Dee that they were going to tear it down. She couldn’t let that happen, because this was where her late husband proposed to her. And she says: “They were going to tear it down and turn it into a parking lot. Progress. WHAT THE HELL IS SO PROGRESSIVE ABOUT A PARKING LOT?!” Scene.

I remember we would go to see the James Bond doubles here. The theater was amazing and the marquee was the biggest and best in the city (the Tivoli, second), with neon and chaser lights.
During the demolition, the workers let me look around the building. I went downtown after school. I was in there two times, at least. Once, I got signs, ‘foodstuff’ licences and a large blueprint of the seating plan. You had to enter the building on King William Street, through the exit door, to the left of the stage. Someone had removed a section of decorative plaster (2 ft, square), and it was cracked and it was just leaning against the wall near the exit. I asked if I could have it—they said yes—and I’ve still got it. Right place, right time. It’s a plaster-relief; a decorative boarder at the top and bottom, two half-human/half-animal figures sitting back-to-back, with a pedistal between them. You can see the renovation paint job on portions of the piece. I remember carrying it out, and there was a phone booth at King William and Catharine. I called my Dad to pick me up in the car. We cut an old piece of carpet, and it layed on it, under my bed for a couple years until I built a frame for it in wood shop. I don’t know if it’s from the auditorium, or lobby or what.

TivFan: Am researching for a novel and would love chat about The Palace. Please contact me:

The Palace Theatre was operated by Hamilton United Theatres of which the estate of George Stroud was the primary shareholder, and Famous Players Canadian Corporation. Famous Players would book the theatre and then after expenses were met would split the profits in equal shares. Famous would not guarantee the results. The other big theatres in the Hamilton United Group were Capitol and Savoy. Mr. George Stroud must have been a very wealthy man!

Opening night of the Pantages Theatre in Hamilton was October 31, 1921.

It changes its name to the Palace around 1927.