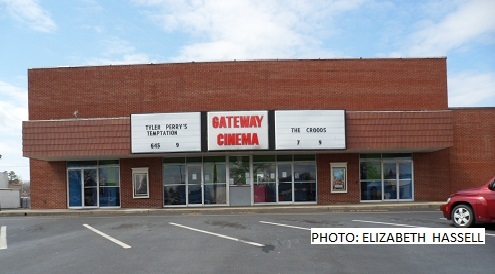 Opened January 19, 1973 as the Gateway 1 & 2 under Schneider-Merl Theatres. It was later operated by Martin Theatre and finally by Carmike Cinemas. Carmike abandoned this theatre in the mid-1990’s. It came under management by an independent chain. It is the only movie theatre operating in town.

Just could not manipulate the street view to get a picture of the theater. I believe the GATEWAY TWIN is barely visible between the gray building on the left and the peaked sign.

It is rather odd to read the complaints on Yahoo since my memories involve a brand new theater. I came across some info that indicated there might have been a change of ownership in 94.

NightHawk1, I don’t know about matinees—since I only attended with nighttime dates. The booth port windows were quite large and one could see the film threaded about the place and the projector in operation.

DavidDynamic and NightHawk1: I found the opening date information on this theatre and revised this onto the Cinema Treasures site. The cinema’s original chain was under Schneider-Merl Theatres Corporation(which also owned and operated several movie theatres in North Carolina in Durham, Raleigh, Fayetteville, Gastonia, Asheville, Burlington, Elizabeth City, and Winston-Salem).

It opened as the Gateway Cinema I & II and it was Elizabeth City’s first-ever twin theatre under Schneider-Merl on January 19, 1973. It was owned and operated later on by Atlanta-based Martin Theatres and later on Carmike Cinemas. By 1994, Carmike Cinemas abandoned this theatre and it was picked up and operated under another owner which was an independent based chain. It was a twin theatre from the start. As of this record, it is the only operating theatre in town under that independent chain.

DavidDynamic and NightHawk1: About those matinees…..

THEATRE HISTORY OF THE GATEWAY CINEMA:

It’s gross….the seats, I put a blanket down for carter, my son, to sit on, completely sanitized throughout the whole movie. The carpet is absolutely disgusting, and stained and the bathroom had pee all over the seats, the sink was gross, and the trash can had a little tiny white trash can stuck in it, wasn’t even the original, very grossed out and disappointed. I WILL NOT be going back, it’s a $4 movie, I get that, but it’s needs to be fixed!!!