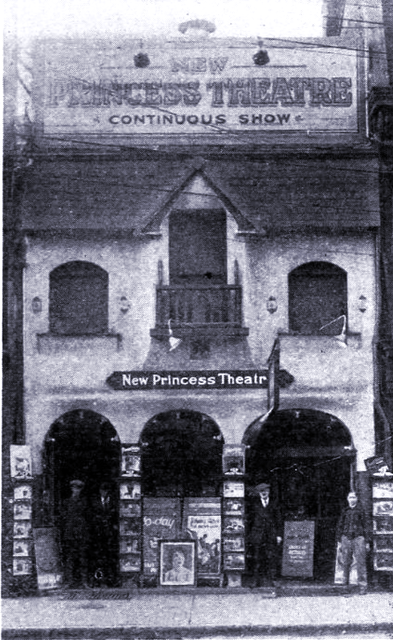 The Princess Theatre closed in the late-1920’s and was later converted into the lobby area of the Tivoli Theatre.

The Princess was also the Wonderland in 1908, the Colonial from 1910-1912 and the Princess from 1913-1923.This information comes from a history of the Tivoli contained in a 2004 City By-law to demolish the old carriage factory portion of the Tivoli Theatre site.

So, from what I’m reading here, when the front of the Tivoli collapsed, was that technically the Princess Theater that was falling over?

Mike. From what I know, the Carrige/Lobby was the front portion of the building, the former Princess theater was behind which was incorperated into part of the lobby and the auditorium was next which is what is still standing. If you go to the Tivoli, you can get more history on the Tivoli including the Princess and Wonderland theatre. Mark.

The Princess Theatre should be marked as demolished. The Tivoli’s auditorium is still standing, but the Princess was in the building that housed the Tivoli’s entrance.

“Earliest shot (from 1909) I have ever seen of the Colonial (aka The Wonderland) cinema that eventually became the Tivoli. (The line up at the Grand Opera House was for a stage production of BEN HUR). The Princess Theatre opened in the same space in 1911 when a small auditorium was added to the back, and the Tivoli was added on the back of that building in in 1924. What is left of the Princess Theatre will be demolished as part of the current plans for the Tivoli condo project.”

Okay, I have spent some time going through the Vernon’s Hamilton city directory, and I have solved one mystery.

The image of the “New Princess Theatre” is the former Unique Theatre at 8 Market Square.

By 1932 it is gone, likely converted to retail?? By the 1940s the address is the Majestic Restaurant.

And to reply to Joe Vogel from a few years back, the 1911 auditorium, stage and fly gallery, still stands in 2021.

In 1924 the Princess Theatre’s auditorium, became the “Tivoli lounge” which is where the concession area was built from the late 1940s onwards.

It was the 1873 Prongelay block, which became a store front nickelodeon, the Colonial Theatre, that was demolished in June of 2004.

I will share the fire insurance map from 1911 that shows the two parts of the building.