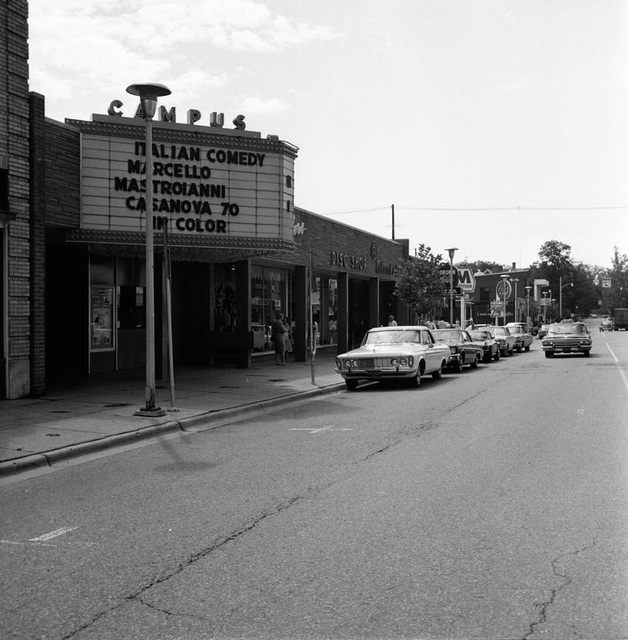 Initially planned to be built on the site of the old Whitney Theatre, the Campus' site was eventually moved to what was felt to be a more centrally located spot on South University Avenue. The Campus Theatre, which opened in 1957, has the distinction of being the only Detroit-area movie theater built in the 1950’s.

The Campus' building not only contained the 1,054-seat theater itself, but retail stores and office space, as well. It had one of the largest screens in Ann Arbor, measuring 40' by 18'. It was operated by the Detroit-based Butterfield Theatres circuit and was designed by Louis Wiltse.

In the early-1980’s, it was acquired by Kerasotes Theatres, which ran the Campus until it closed in 1987, the last film on its marquee being “King Kong Lives”. Despite talk of the theater perhaps being reopened as an art house, nothing ever came to fruition, and the Campus Theatre was torn down within a year, replaced by a strip mall.

A little bit of trivia, from someone who spent his high school years working at Butterfield candy stands:

The Campus was the only one of Butterfield’s four A2 theaters that didn’t pop its own corn, but instead they brought in this horrific tasting pre-popped stuff. The manager of the campus (at least in 1979) was a 50+ year Butterfield employee…I think her name was Lois…who worked the box office at the Michigan the night it opened in 1928.