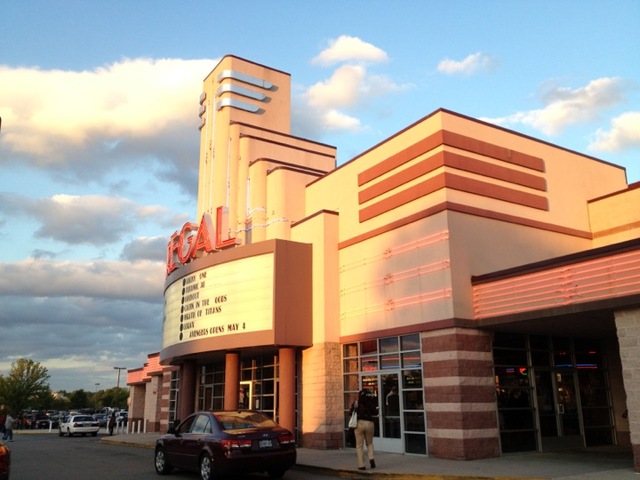 This theatre opened in 1995 with 14 screens. Regal expanded it to 20 screens in 1999. The theatre features stadium seating, digital projection and sound, 3D capabilities, self service ticketing and first run attractions.

This venue was purpose-built by Regal in the late 90s but uses a design I’ve never seen anywhere else.

The theater does not have an outdoor-facing box office or a “no glass” indoor ticket counter, the two designs I have seen at all other theaters I’ve ever visited. Instead it has an enclosed glass box office as an “island” within the lobby. Being able to line up out of the elements during rain or cold is convenient, though there is very limited space and often the line backs up to the entry doors, making getting in when you’ve already purchased a ticket inconvenient.

Go around the box office island and you get the concession stand, with the entry chokepoint to its right. Even though this complex has 20 screens they do not use a “wing” or “ring” design, instead all traffic flows unidirectionally into a series of hallways starting with a left turn beyond the ticket-taking stand that puts you behind the concession stand.

The total amount of travel from the ticket collection point to the farthest screen is substantially larger than at any other theater in the area. To make up for this disincentivizing trips to the concession stand, there is a quite large satellite stand located within the maze of corridors, which I have never seen active on any visit. While the practice of multiple stands used to be common, Regal no longer includes them in their new builds and this is the last surviving “satellite” stand in a Richmond-area theater even though it appears to be permanently out of use.