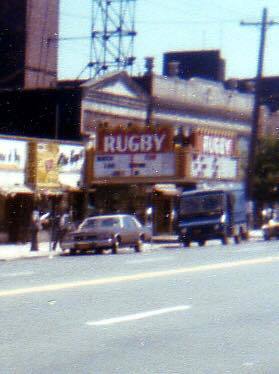 The Rugby Theatre stood on Utica Avenue just north of Church Avenue. It opened in 1926 and was designed by architect Harrison G. Wiseman. It was equipped with a Robert Morton 2 manual 3 rank theatre organ. It also had a roof garden theatre which seated 722. Alterations were carried out in 1932 & 1933 to the plans of architect Eugene DeRosa. By 1943 it was operated by Rugoff & Becker, who were still the operators in 1950.

Later operated by the Brandt Theatres chain, it was taken over by the Golden Theater chain in the early-1970’s and operated as a dollar theater. Then it went showcase run, before being twinned in 1976 by seperating the balcony.

Here is a reminiscence of the Rugby:
http://eyeshot.net/grayson1.html

Pic of the Rugby on BrooklynPix.com:

PaulKupperberg-Max Schering owned the Oceana, Granada and Rugby. Golden Theatre Management first took over the managment of the theatres with Max remaining as a partner until Golden bought him out around 1975. About 1976 he was going to manage the newly tripled Fortway Theatre for Golden, but after a short time he decided to retire and moved to Florida. I installed the projection equipment when the Rugby, Beverly, Oceana, Fortway, Benson and Alpine in Brooklyn and the Olympia and Quad Cinema in Manhattan were multiplexed, as well as servicing and repairing them from 1972 until 1987. In 1988, Golden Theatre Management sold the theatres that were still operating to Cineplex Odeon Theatres.

I just found this site. I worked at the Rugby from 1970-1974. The pizza place next door was Little Venice and had incredible pizza. There was a deli across the street – I believe it as called Victors. I worked there before and after the conversion to a twin theater. The was a bowling alley next to Little Venice..

That'sfunny because I remember seeing that horrendous Sgt. Pepper movie at the Rugby, the one with the BeeGees in it!