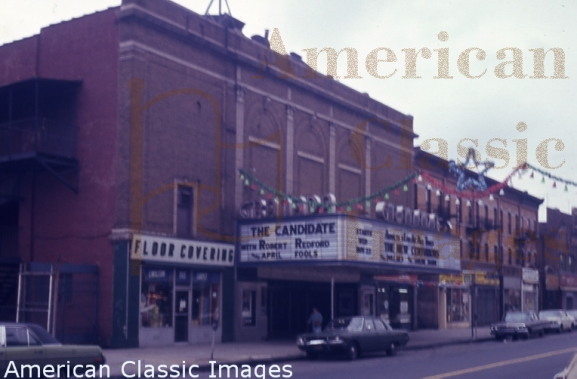 The Filmland Theatre opened in 1925 and stood at the intersection of Nostrand Avenue and Church Avenue. By 1930 it had been re-named Granada Theatre. It had a huge marquee and was a single-level house, which was sub-run for years. By 1957 it was operated by Liggett-Florin Booking Service.

The Golden Theater chain took it over in the early-1970’s, and turned its declining fortune around as a dollar theatre. Later it ran second-run double features and some first run.

Finally it ran action and blaxploitation before closing. It was retrofitted as a Pioneer Supermarket, but it eventually closed as well.

Someone told me that was a posted picture of the Granada Theatre of the marquee playing the Sicilian Clan and The Kremlin Letter as co-feature. Every week I took a photo of the front and side panels of the marquee, but some how they disappeared. I also have the backlog of the exhibitor ads from 1964 to 1974 that read Granada-Highway-Rugby (Adults $1.00 At All Times) Ads that were the 3 theatrs trademark running Wed, Fri, and Sat in the NY Post (then the best known MovieGuide Listing for the five boroughs) and in the Brooklyn addition of the Daily News. I hope no one is using my lost Granada photos in this listing as I have all the negatives which I never redeveloped.

That picture of the Granada Theatre is not on this website, it’s actually in the archives of the Theatre Historical Society of America as part of the Edward T. Gibbs Collection.

Uploaded a picture from the American Classic images collection.

50 years ago, today… I was sittings myself down to see Walt Disney’s first run The Jungle Book", here at the Granada Theatre. It was a Saturday and doors opened early on the second day (Saturday) at 10:30 AM. The 2nd feature was “Charlie, the Lonesome Cougar”. I was and still am 11 in mind. Envisionment is a wonderful thing! Happy Holidays and Season’s Greetings….

My name is Linda Breuer Lissman. My father owner the Granada Theatre until his death in l965. I have very fond memories, spending many Saturdays there. I remember Joe Coppolino. My father was very fond of him.

Will the person who has the negtives of pictures of the Granada Theatre please get in touch with me. My father owned the Granada until his death in l965. Linda Breuer Lissman

Orlando, if you worked at the Granada Theatre from l960 you knew my father, Erwin Breuer. On many Saturdays I worked behind the candy stand. I remember those matinees. The candy stand was jumping. Linda Breuer Lissman

As a child and preteen I lived in that neighborhood and went to the Granada on many a Saturday afternoon. Always the double feature, maybe a newsreal, the races ..the Saturday Kiddie Matinee’s. I also remember the incentives offered for weekday nights ..towels, dishes etc..to get the ladies in. Across the street but fairly close was a woolworth’s. Candy was 6 for 25 cents. It was a lot less then in the theatre..but if we bought the candy at woolworth’s we usually had enough money to get a box of bon bons ice cream. I also remember there was a small chinese restaurant either nextdoor to the theatre of a store or two away. My friend Robert Dong lived there ..his sister and brother in law owned the restaurant… I am 71 now..and yet I still remember all of us kids walking over to the theatre for our Sat. matinee’s…I also remember a green grocer on the corner of Nostrand and Church..and big wooden barrels..some had pickles and some had nut in shells..and the trolley with the electric wire overhead..lots of good memories..

The Avoca Villa Theatre was formerly known as the Crescent Theatre according to a 1929 ad.

My dad managed the Granada in the early 70s, after working at the Century circuit all over Brooklyn for 15 years. He died suddenly in 1974.