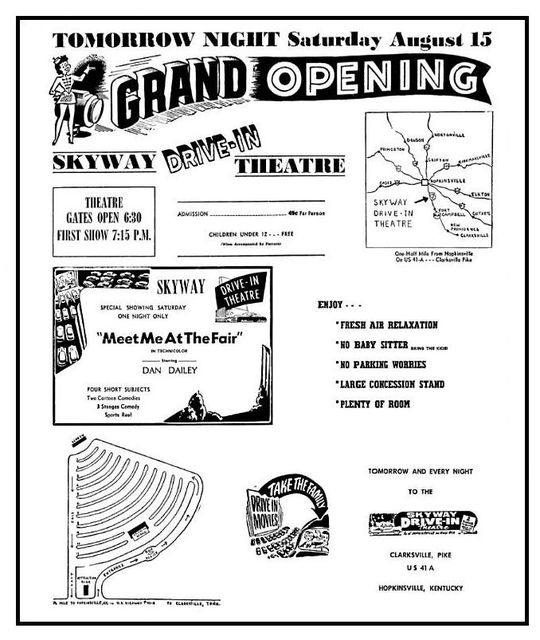 The Skyway Drive-In opened on August 15, 1953, with a 580 car capacity. The opening night feature was “Meet Me at the Fair” with Dan Dailey and Diana Lynn. It also will be showing cartoons, Three Stooges shorts and sport shorts. It was owned by Crescent Theatres and Jon McCoy will be the manager of the theatre. It will be open all year long and during the winter season it will be open Fridays, Saturdays and Sunday’s only. The screen tower was 60 feet high with the screen measuring 43 feet X 43 feet and was be able to withstand winds up to 125mph. The drive-in had a cafeteria style concession stand with a 122 feet patio out front with tables, chairs for 150 people. The patio had indirect lighting and speakers so people can enjoy the movies. It was located on ramps 9 and 10.

The Skyway Drive-In was equipped with Ballantyne Century (water cooled) projectors with super-snaplight lenses with a projector throw of 493 feet. The projection booth is located on top of the concession stand. The projectors are also equipped with 24” film magazines, with anticipating of showing 3D films in the future. They also have the new Ballantyne “Dub'l Cone” in-a-car speakers. All sound and projection equipment was provided by Hadden Theater Supply Company. They had a uniformed policeman on duty nightly maintaining order and to enforcing the 10 mph speed limit.

Visited here as a kid, had a blast too.