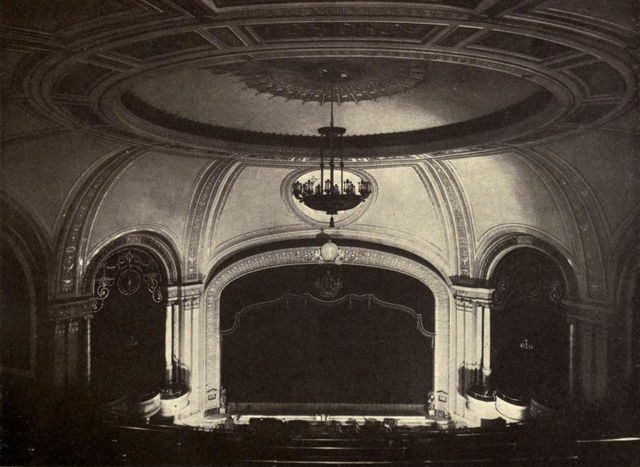 The Republic Theatre opened on October 27, 1921, with 3,100 seats. Built by the Small-Strausberg circuit it featured vaudeville and the opening movie was “Clay Dollars” starring Eugene O'Brien. It was equipped with a Moller 3 manual 17 rank organ.

Later operated by Fox Theatres, it passed to RKO, reopening on September 1, 1937 with Ritz Brothers in “You Can’t Have Everything” & Gloria Stuart in “Lady Escapes”, and they operated it until 1949.

Taken over by Randforce Theatres chain, it was closed in 1965. Demolished, a gas station was built on part of the site. By 2011, the gas station had closed and plans were put forward to build housing on the site, which by 2020 had been built as affordable luxury apartments.

What a great shot. I still can’t believe that such a major theater existed in what is now a gas station!

Since the Republic was showing Citizen Kane on this occasion, this shot must have been taken in the warm months of 1941.

Finally, when you link to the photo, by all means take a look at the lower numbered pictures. Most of them are pin-up shots featuring RKO’s young starlets. They are really hot. (The higher numbered photos mostly depict more formal pictures of RKO’s principal stars, including Leslie Howard, Kate Hepburn and Edna May Oliver. They are also very interesting, albeit less provacative.)

I’ve only watched Citizen Kane on the small screen. Having been to the Republic, I can imagine the even greater impact of seeing that film in such a grand setting.

Link to print of 1922 Lobby Display in Republic Theatre

The attached link indicates that a mixed residential and commercial development will be constructed on the site of the old Republic. Apparently, the “current” gas station use has been vacant for some time.

While, as the article clearly states, the proposal is not uncontroversial – since it will provide “affordable luxury” instead of “affordable, affordable” housing in a poor but rapidly gentrifying neighborhood – it certainly represents a significant upgrade from the site’s most recent gas station use.

I think early 60’s my dad and I would buy bagels at night hot from the oven for 7 cents each on Rodney St. across from a then closed and very dark intimadating structure which I believe to be the Republic Theater. I was only about 8 or 9 years old but I could be mistaken. If anyone remembers and could locate the site on the Google map I would appreciate a response. I also remember after it was torn down it was replaced with a gas station on what seemed like a triangled shaped block.

We always called this movie the RKO Republic and it was on a triangle shaped piece of land. You are right for across the street (1st street) was the Republic bagel company. As I can remember the movie was bounded by Keap, Grand & Borinquen place (spelling). It was a very nice movie house showing first run movies. There was a grand staircase leading up to the two upper levels on the left side as you entered after the lobby. There were several boxes on both sides of the theater as well as the mezzanine and lodge (the smoking section)

my grandparents had a fruit store on keap st. across the street at the time of construction. they sold lunch for the workers. there was a time or two when the contractor didn’t have money to pay for the cement. my grandfather would him the money. I went to the movie many times, I lived a few blocks away and my dad had a part time job with them for years. across the street we bought hot rolls and bagels 6 for 25 cents in the 1950’s

My older brother worked for a time at the gas station.

Berternie – the Bakery that you made reference to on Rodney St. was called “ Royal Bakery”. It had that best bagels and rolls found anywhere. They would stay open till Midnight, and they had plenty of customers to stay open that late. It was off Grand St., one block from the Republic Theater. I hope I was able to complete your memory, on this question.