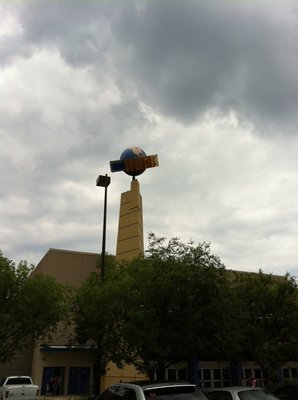 Opened by Hoyts on March 13, 1998. Out of all the Hoyts theaters in America that were sold to Regal in 2004, this 14-screen cineplex in Linthicum, Maryland retained the original logos and design. However, it now operates as an independent theater, using the name West Nursery Cinemas.

As for accommodations, the theater is well-appreciated by locals for its tidiness, and features 7.1 Dolby HD sound and digital HD projection.

Exterior pictures of the theater can be found on its page at CinemaTour; click on the thumbnails to enlarge them.

This one and Simsbury Commons (Simsbury CT) still operate as “Hoyts” – I know “Northeast Cinemas LLC” ran all of the non-Regal purchased sites until they were taken over by others. Bow Tie and National Amusements took over sites that fit their business model that Regal didn’t – leaving ultimately a few. Whomever is running these though is converting them to digital – it’s not entirely unlikely its Hoyts Australia – – after all AMC is stuck with one location in Canada and one in the UK.

The theater site had me confused for a bit.

Anyways, I wonder how it’s aged since they kept the Hoyt’s name.

There was an earlier posting that disappeared for this theater, like many others. I know because I posted! This theater opened around 1995 or 1996. It preceded the Hoyts Bowie theater in opening. I can’t remember what movie I saw there but I’d say they are almost identical in layout, with two huge, two-story type theaters..maybe its four but I remember there being an elevator you could take to the second level. On the second level, it was planned to be an area for people to congregate and eat but like the Bowie multiplex, it never came to be.

This cinema and a suburban Hartford CT location are the last two Hoyt’s cinemas left in North America. Hoyt’s cinemas are one of the major chains in Australia, which was taken over by Wanda (which owns AMC) in 2016.

This cinema opened on March 13th, 1998. Grand opening ad in the photo section.

Visited this week and added pics of exterior and interior with all the Hoyts signage still in place.