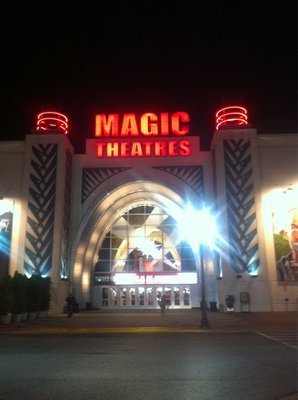 This was the last of the Magic Johnson branded theatres opened by Loews prior to the AMC merger. This was the first Magic Johnson location that Magic was not involved in. Loews simply used the name to brand the theatre. It opened in November 2005at the brand new shopping center Boulevard at the Capital Center, which was built on the site of the former Capital Center/US Air Arena. There are 12 screens and an expanded concession menu. An IMAX theatre was later shoe-horned in one of the auditoriums.

If the information about the Magic Johnson Theaters on the Wikipedia page about them is correct, this particular theater was not a part of the original Magic Johnson group of theaters that was co-owned by Johnson and Loews-Cineplex. It was built by AMC on its own and given the Magic Johnson branding. Its exterior architectural design looks nothing like any of the other Magic Johnson theaters.

This should be interesting.

This theater has been open several years. It must have had a proper listing before as I did blog about it. For whatever reason, I have been noticing postings and theaters disappearing from the site with no reason or explanation. After several emails sent, over the years, there has never been a response. Perhaps, they’ve been lost with the site upgrades. Who knows.

This venue is about 25 minutes from where I live and my friend and I were there on opening weekend where it was a big event. It was originally a Loews Cineplex/Magic Johnson venue where the local paper had a story about its opening and how, at the time, Magic Johnson Theaters chose ‘underserved’ areas to open new movie theaters. AMC, of course, took over, having bought out Loews Cineplex a few years ago. The outdoor shopping center was also new, at the time, having been built on what was the former Capital Center auditorium where Barbara Streisand had her comeback concert way back in ‘94 or so.

Given the proximity of this venue to Washington DC, its fair to say that they get patrons from all over. Some of it, of course, of the urban and less disciplined variety. You will see police officers in and out of their cars making their presence, so there is a feeling of security after you leave a later show.

The IMAX-lite addition is a recent install, probably last year. I have not been there since the last Shrek Forever After movie, in 3D. Its funny that the weeknight showing I attended was where I had the theater all to myself. They forgot to start the movie. Perhaps they thought no one was going to show and did not bother starting it. I went back to the ticket person to remind them I was there AND to get the 3D glasses they forgot to give me. I had thought they’d hand out the 3D glasses as you went into the actual theater, as they had other screens showing movies flat.

Prior to that, my friend and I saw a movie in one of the larger auditoriums..the title I forget, but I do remember there was a BIG argument started between families over something that escalated to an almost brawl. Thankfully, it calmed down.

Perhaps one day I will visit the IMAX-lite theater, but I suspect it will be like all the other AMC installs. There were some pretty large auditoriums with huge wall to wall screens.

The Concession area is fairly large and varied. Other than White Marsh, that I know of, here they have hot wings for $15 or so!

My friend and I caught ‘The Hobbit’ on the IMAX-lite screen in #12, in 3D, this past weekend. The description above about it being shoe horned in is apt. I’m almost sure I’ve seen movies in this one before and believe that the screen was just enlarged to accommodate the IMAX projection. Sound and picture were first rate. The presentation was not in the much touted HFR. I believe this is the only venue, of the IMAX-lite screens, to not have the HFR copy in this market. For the late showing, there were only maybe 5 people in attendance.

The 9-minute preview of the Star Trek Into Darkness movie was terrific. The 3D effect of the scene where the natives shoot darts at Kirk and Scotty made me jump as if it were coming off the screen.

This theatre was actually built by Loews Cineplex. This theatre has the same building design as the Loews Alderwood Mall 16, in Lynnwood, WA, as well as the AMC Rockaway 16 (Rockaway, NJ), AMC Aviation 12 (linden, NJ), and AMc Westgate 20 (Glendale, AZ)

That design has origins in Canada – I’ve been to a few Cineplex Odeon sites in the GTA that have similar design to AMC Rockaway (Cineplex Queensway and Cineplex Niagara Square) and sites were on the drawing board before the AMC merger.

I saw ‘Oz the Great and Powerful’ in IMAX(-lite)3D. I’ve discovered that there seems to be tiered pricing; first showing, matinee and evening prices. Fortunately, I had accumulated a $10 credit used towards the $17 matinee price. This AMC has upgraded concessions and offers coffee drinks and smoothies. The Concession staff could be more friendly as to greet you as they see you, or at least acknowledge you in some way.

Presentation was as decent as the last time. The preshow presentation is now in 3D..perhaps 3D for the presentations in 3D. I enjoyed the Academy-type ratio aspect of the opening probably as an ode to the early movies…s-t-r-e-t-c-h-i-n-g to widescreen upon arriving to Oz. I had to take off my 3D glasses to make sure they did not use the sepia tone that the original had during the ‘present-day’ Kansas scenes..they weren’t. :( I enjoyed the movie, overall, the Oz sequences were appropriately exaggerated and decent surrounds especially during the tornado sequence as the balloon goes around and around. I think James Franco plays too cute as the Wizard..if only director Raimi had gotten his first choice, Robert Downey, Jr…

A really nice touch to the theater are the multi-story high movie murals of movies coming or have played. They need to take down some of the older movies that have gone from last year. I can’t think of any other local venue that compares..maybe the AMC White Marsh, but it has no external murals that I can recall of during my visits there a few years ago.

I saw ‘The Butler’ in #11 during an afternoon matinee. I used my $10 AMC rebate voucher, which paid for all but $1 of my ticket. For a matinee, $11 is quite pricey. 11 was a decently sized house with the usual AMC wall to wall screens. Nothing to rave about technically. I think the praise heaved on Oprah is way overrated. It seems her character is given the diva treatment in that she changes costume in just about every scene she is in. Forest Whitaker plays his role as one would expect. Nothing really profound here other than to see actors play the different Presidents and revisit parts of history over the last 40 years.

I forgot to mention that one has to marvel at the humongous multi story sized movie posters they have all over the place. Unfortunately, most of the movies have long gone..‘World War Z,’ for example.