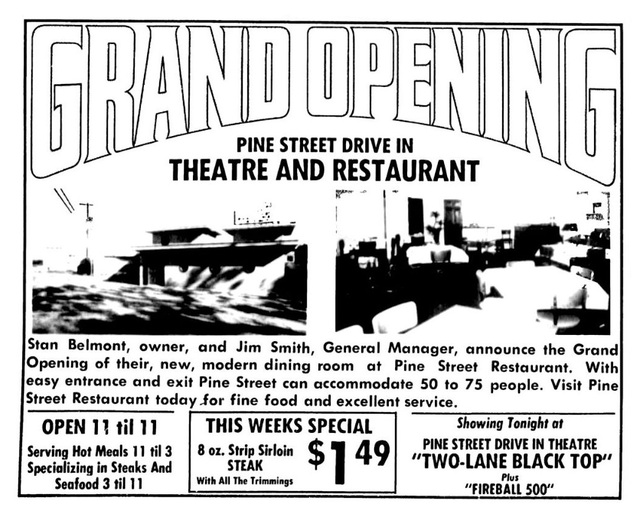 The Pine Street Extension Drive-In opened on May 25, 1951, featuring “Drums” (UK title of this British film “The Drum”) with Sabu Dasbu, Raymond Massey, Roger Liversey and Valerie Hobson. It was owned by Nicholas E. Belmont, who passed away in 1967. His son Stanton N. Belmont, took over ownership of the drive-in. It was advertised as ‘Spartanburg’s Number One Drive-In’. Belmont also owned the King Cotton Drive-In in Greer, SC and the Belmont Drive-In in Greenville, SC. It had a parking ramp that could hold 300 cars. Stan Belmont and Jim Smith, general manager, opened the Pine Street Restaurant beside the drive-in on September 19, 1971.

On March 3, 1974, the name of the drive-in was changed to the Pine Street Outdoor Cinema. It finally screened its last show in January 1980 and closed. It was demolished and the site is now occupied by several businesses. Stanton N. Belmont passed away in 1989.

Just updated, any photos or any other information would be great.