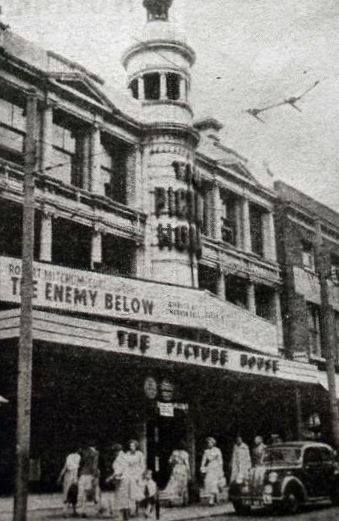 The Picture Hose was the first purpose built cinema to open in Ipswich and was built for British Cinematograph Theatres. It was opened on 14th December 1910 with 650 seats. Designed by noted theatre architect Frank Matcham, it also boasted a Jacobean Tea Room. Business was so good that it was soon enlarged with another 120 seats and a cafe was also added by 1921. As well as a small orchestra, a 2manual organ manufactured by Bishop & Sons was installed.

In 1927, additional land was purchased on the side of the building, and work began erecting a new auditorium. The architect for the alterations is thought to be local Ipswich architect Harold Ridley Hooper. The cinema continued to operate while work was going on, but eventually closed for three months while the original auditorium was demolished and building work was completed. The Picture House re-opened later in 1927 with a 1,139 seating capacity. In 1929, the Picture House was the first in Ipswich to be equipped with sound, here a Western Electric(WE) sound system was installed and the first film was the talkie drama “Broadway”.

Soon larger more modern purpose built cinemas were opening in the town and the Picture House was relegated to screening second run and ‘B’ films.

In 1954, the Picture House was one of many independent cinemas throughout the country which were equipped to screen CinemaScope films, due to a fall-out between the Rank Organisation and 20th Century Fox over installation of the new system (Fox films usually had a Rank release). The first CinemaScope film to play at the Picture House was Richard Burton in “The Robe”, which was presented in Four Track Stereophonic Sound.

The Picture House was closed on 14th September 1958, and the restaurant closed when the lease ran out on 6th December 1958. The building was purchased for redevelopment and was demolished. The new building on the site housed a Timothy White’s chemist. Today it operates as a branch of Boots the Chemist.

As a matter of interest the organ was supplied in 1927 by Bishop & Son. the console was originally installed in the orchestra pit with the stage front being adapted so that the organist could see the screen. Later the console was placed on a moveable platform and could be ‘winched’ out from the wings by winding a handle. The organ which was essentially a church instrument was purchased form the cinema (date uncertain) by a builder from East Grinstead. It was subsequently installed by Bishop and Son at Bedminster Methodist Church Bristol in C1950. It is believed to still be there (Jan 2016). The church was closed several years ago and the new owners thought that they would like to keep the instrument as part of an arts centre.