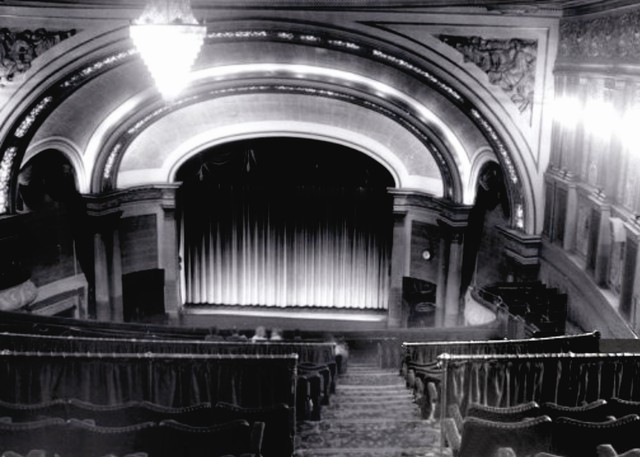 The Prince Edward Theatre opened on 22nd November 1924 with the silent version of Cecil B. DeMille’s “The Ten Commandments”, which ran for 36 weeks. It was designed by the architectural firm Robertson and Marks, with marble staircases, a fountain, and a 16 foot crystal chandelier in the dome in the auditorium. The theatre had a Wurlitzer 2Manual/10Ranks organ which was opened by American organist Eddie Horton, who had come over from the California Theatre, San Francisco, California. There was a full orchestra, the Prince Edward Concert Orchestra, initially conducted by American conductor Will Prior, from Grauman’s Metropolitan Theatre, Los Angeles, California. Stage presentation Prologues were also featured as part of the programme in the early years.

Bob Hope attended the opening of his film “The Seven Little Foys” in June 1955, which included an appearance on the stage. Almost every film screened at the Prince Edward Theatre was from the Paramount Studios.

It closed on 4 December 1965 with a re-presentation of “War and Peace, starring Audrey Hepburn. It was later demolished.

VISTAVISION Some clarity from the Widescreen Museum. Curator Martin Hart wrote “the first concept of VistaVision called for standard 35mm prints”. Some films were shown in 8 perf horizontal mode in limited runs. Paramount’s preferred ratio was 1.66:1 but it was possible to make 35mm 4 perf anamorphic prints of 2.00:1 however the vast majority were 35mm prints. Hart says with Technicolor dye prints made from the large Eastman neg, VistaVision provided an extremely sharp image with beautifully saturated colors. Ken is correct about only 35mm prints shown in Sydney, beginning with White Christmas.

No mention seems to be made about the wonderful arcade under The Prince Edward Theatre. I can remember descending steps from Elizabeth Street, passing through a, beautifully cool in summer, arcade which took me out into Castlereagh Street. Does anyone else remember that arcade? Why are there no photos of it?

Perhaps it’s Christmas that has caused the reflection but thought of my mother’s fall because of the water splashing onto the surrounding floor and the ensuing legal challenge. Which she lost. Wouldn’t have happened in today’s world. (Note the fountain’s not overflowing to the surrounds in the pic.)

In the mid 80’s a book was published called ‘A Pictorial History of Sydney’s Prince Edward Theatre Beautiful’ by Barry Sharp. Probably long out of print but the ISBN number as printed in the book is 0 9594252 2 5.

This opened on November 22nd, 1924. Its grand opening ad can be found in the photo section for this cinema.

“How did they get the plane inside the theatre?”

This was also the theatre in which Errol Flynn’s first film, “In The Wake Of The Bounty,” premiered on March 13, 1933.

No Australian cinema ever installed Vista-Vision. VV was limited only to a few cinemas in the USA and one in London. Some U.K. and Australian cinemas did have a larger screen and a different lens to improve the projected image but the film was always 35mm not Vista-Vision. False advertising re films being in Vista -Vision (when they weren’t) was common in the fifties in the U.K.,Australia and where I worked in New Zealand and probably elsewhere as well. Anyone who said that V.V. was shown in Australia is wrong and probably suffering from dementia.

All VistaVision films were advertised as being in VistaVision, and carried an on screen credit to that effect. The fact that they were standard 35mm vertical reduction prints was irrelevant, the process was promoted as Motion Picture High Fidelity as it produced sharper images than standard 35mm blown up to widescreen. Paramount’s recommended ratio for VistaVision was 1.85:1. London actually had two horizontal eight perf VistaVision venues, Paramount’s Plaza, Lower Regent Street and Rank’s Odeon Leicester Square (Rank had adopted VistaVision as a snub to 20th Century Fox who had taken their CinemaScope films away from the Rank circuits in a dispute over full ‘Scope installations and extended runs).

The site is now an office building?