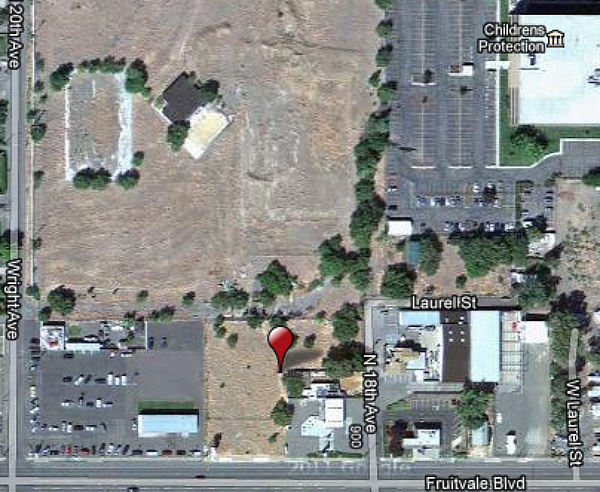 Built in 1966 as a three-screen drive-in called Fruitvale 410 Drive-In, as US Route 410 went through Yakima at the time. (The route was taken over by U.S. Route 12.) In 1972, the drive-in would create a “Cinema Centre”, or an indoor theater within the outdoor drive-in.

In September 1974, theater owner James Bonholzer was involved in an obscenity trial for showing “Deep Throat” in the Cinema Centre. Since he did not meet “community standards”, a judge fined Bonholzer $1,000 and was told to destroy the film.

The drive-in was torn down in 1985. A car lot sits next to where the drive-in used to be. As of June 2012, the land remains untouched, and online satellite maps show where the snack bar, cinema centre, and screen used to be. The fence on N. 20th Avenue still has an arrow sign for the entrance, and the car lot now uses the drive-in marquee as their own.

The Fruitvale had 4 screens, 3 drive in and one indoor.The indoor was a single screen named Cinema I. One booth and one snack bar served the entire project. Land mass was approx 11 acres. The theatre was never operated by First National Theatres, The theatre always has been and land still under my control. I personally supervised construction and operation of the entire project. The first drive in opened in 1966 . The drive ins were color coded, Red, Green and Blue, rather than numbered. A single box office served the 3 drive ins. I am James R Bonholzer, the theatres owner. Thank you for allowing me to add these facts. JRB

Mr. Bonholzer: Did your projectors go to the Rodeo Drive-in Theater in Port Orchard/Bremerton? I remember seeing red, green, and blue colored Brenkert projectors there at the Rodeo.

YES, Ken. Jack used to manage my Top Hi Drive in and was a valued employee and friend. He had Brenkert projectors at the Rodeo and parts were becoming scarce for these models. When I closed the Fruitvale and started to remove the Cinema, I contacted Jack and suggested he bring a truck over and load up all the old equipment I had, and he would have parts for years. I gave him this equipment. Glad it still is in use. The Fruitvale still is vacant land and all buildings and screens have been removed, it is last of my 8 drive in screens and 2 indoor theatres properties to be disposed of. Jim Bonholzer

shobiz26.. do have pictures of the drive-ins to share?

Mr. Bonholzer, i would like to talk to you, how may i get in contact with you?

Sorry to be so late in responding. Contact me at I seldom check this site Thanks for note Jim Bonholzer PS as of May, 2015 the Fruitvale is still vacant land, about 11 acres.