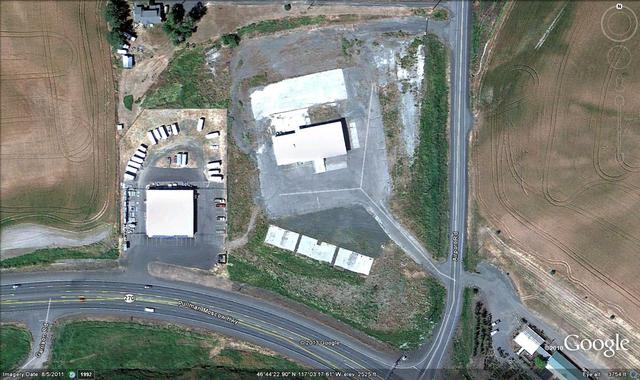 The Auto Drive-In was near the Washington State/Idaho border at the intersection between WA State Route 270 and Pullman Airport Road. It was opened on July 29, 1950. Around 1962 it was renamed Varsity Drive-In. It was still open in 1965.

Site is now occupied by Platt Electrical Supply, just west of the Washington State line, and only two miles west of Moscow, Idaho. It was on the corner of WA-270 and Pullman Airport Road.

What is somewhat confusing about this is that Pullman Airport Road loops around to intersect WA-270 at two points which are almost five mile apart.

Topo Maps clearly indicate the location of the drive-in at the more easterly intersection, closer to Moscow than to Pullman, but technically still in Pullman due to being on the west side of the state line between Idaho and Washington.

According to local resident of Moscow, this was known as the Varsity Drive-In.

The 1962, 1964, & 1965 IMPA Theatre Catalogs all refer to a Varsity Drive-In in Washington State, under the location of Moscow Pullman Highway, and not the name of the town. This is unusual, since these catalogs normally organize their lists by town or city names, and not by roadways. Due to the proximity of the state line between Idaho and Washington, technically this should be listed under the town of Pullman, Washington, but since it was located only two miles west of Moscow, Idaho, it also served that community, if not more so.

1951-52 IMPA Theatre Catalog also shows the Auto Drive-In, Moscow/Pullman, 465 cars, and E. Metzgar as the owner. This is the exact same information which appears in the 1962, 1964, and 1965 IMPA Theatre Catalogs, so it appears as though this originally opened as the Auto Drive-In in 1950, and sometime before 1962 was renamed the Varsity Drive-In.