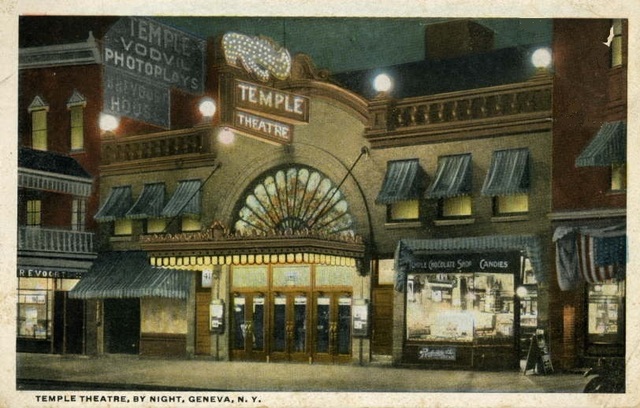 The Temple Theater opened on Exchange Street in 1912. It was originally primarily a vaudeville house, but also screened movies. During the Depression, the theater was closed. It reopened in the early-1940’s under the Schine Circuit chain, but closed again during the 1950’s. During the 1960’s, the building was used as a teen dance club.

The Temple Theater was torn down in 1976 after its roof collapsed.

The Temple Theatre opened on January 20, 1912, according to Ranjit Sandhu’s list of the works of Leon H. Lempert & Son. Sandhu doesn’t attribute the original design to any architect, but cites an item in the June 21, 1913, issue of American Contractor saying that Leon Lempert Jr., was the architect for a stage that was being added to the house.

It’s possible that Lempert was also the original architect for the Temple Theatre. The lack of attribution simply means that Sandhu was unable to find one in publications from the period. I haven’t found one either.

This colorized postcard is probably later than the one we currently display. It shows that a marquee had been added to the building, glass doors had been put in place to create a vestibule, and a colorful fan light had been installed in the arch above the entrance.