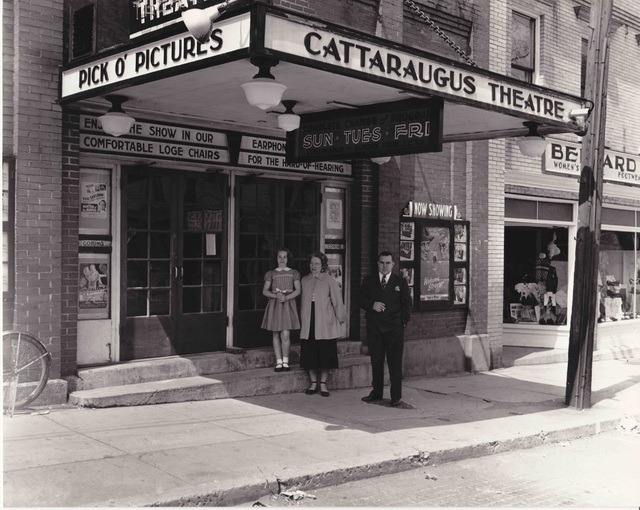 The Palace Theatre was constructed in 1909 by Edgar J. Snow for moving picture shows and for live theatrical performances. Today, the building physically adjoins Pascarella’s Restaurant building and is sort of scabbed on to it. The theatre roof trusses are supported by the restaurant building wall. The building to the east of the theatre was the first Ford Garage in Cattaraugus. It was constructed in 1912 and it too was scabbed on to the theatre building. From the very beginning the theatre was named the Palace Theatre. It was constructed to be 100’ long by 33’ wide. It has a 10’ by 33’ two story addition to the west side behind the restaurant which was used for dressing rooms and storage. The building also featured a large 26’ by 32’ stage, an impressive balcony, an orchestra pit, ticket booth, refreshment stand and seating for 395 patrons. There were three large wooden cylinders above the stage, in the rafters, that had theatrical backdrops that were hand painted canvases rolled up on them. One canvas had illustrated advertising for local merchants. Another had a wide black border with decorative scroll work surrounding a white canvas upon which movies were projected. In the orchestra pit, a house band played before and during movie and stage performances. Ruth Rich Holbrook’s piano accompaniment of silent films was always excellent, emanating from her position in the orchestra pit, stage right. Edgar Snow sold the theatre to John G. Nichols in 1913.

In 1922 it was sold to Dan B. Cunningham and his wife Alice. In 1929 Arthur and Lester Bamford purchased the theatre. They sold it to Herman Lorence in 1935 and it was remodeled, reopening on July 12, 1935 as the Cattaraugus Theatre. In 1940 Thomas Rance from London, England and his wife Maude moved here from Arcade, New York to purchase and operate the Palace Theatre. When Mr. Rance passed away in 1947, his wife’s son Malcolm Pittman operated the Theatre until 1950. In that year, partners Linwood Haviland and Charles Finnerty acquired the Palace Theatre. The last show (as locals called all performances and movies) was in 1959. In October of that year, Maude Rance re-acquired the theatre.

Since 1959 it has been variously used for storage, apartments, and a barbershop. Ownership since 1959 reads Russell Mancuso to Chuck Welch to Mike Zimbardi to Patrick Cullen in 1998. In 2005, Patrick Cullen donated the theatre to the Historic Cattaraugus Corporation which will conserve the building and commence raising monies to restore it to a multi-use facility to benefit the entire community. When Cullen purchased the building he discovered that the roof joists were partially constructed using pieces of shipping crates that were scavenged from the scrap pile at the Erie Train Depot. That the trusses had lasted so long was a testament to local ingenuity. It was decided to slowly deconstruct the rear portion of the theatre, saving any items of historic significance, especially the brick and stage flooring. The area from just in front of the balcony to the front of the building was in much better condition and a front wall was constructed and a roof installed to protect the balcony and remaining structure from the elements.

In the Spring of 2007, an extensive preservation effort was undertaken to point up and restore the ornate brick façade. Historic brick restoration expert and former resident Brent Kickbush was consulted and local hardware store owner Marc Pritchard supervised the revitalization project. The Historic Cattaraugus Corporation (HCC), the owner of the theatre, relies on individual contributions to preserve the historic buildings of Cattaraugus. The mission of the HCC is to make available these historic buildings to individuals to operate businesses in a revitalized setting. The HCC is a nonprofit corporation chartered by the New York State Education Department. Its tax exempt status has been approved by the IRS and it is properly registered with the New York State Attorney General’s Charities Bureau. Any donation is tax deductible. Donations are respectfully requested and can be mailed or presented to Colleen Young, President, Historic Cattaraugus Corporation; 24 Main Street; Cattaraugus, New York 14719.

All this information was provided to me by Patrick Cullen, the current owner of the building.

Also known as the Cattaraugus Theatre

The Palace Theatre was remodeled and reopened as the Cattaraugus Theatre on July 12, 1935.