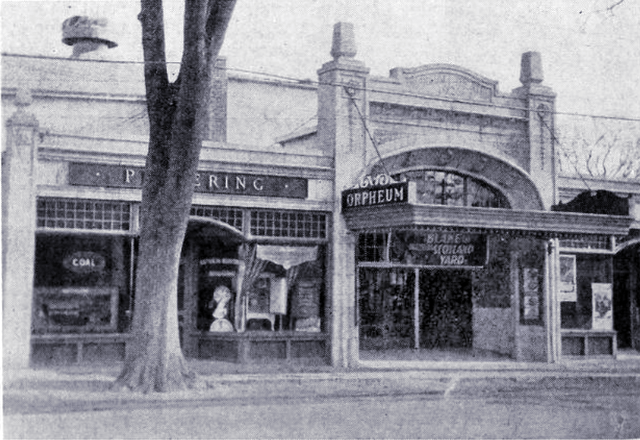 The Orpheum Theatre was opened around 1927, replacing an earlier theatre destroyed by fire. It was still open into the 1960’s.

There were two houses called the Orpheum in Danvers. The annual report of the Peabody Institute published in March, 1912, mentioned an event with movies held at the Orpheum Theatre in Danvers the previous November. I’ve also found references from 1916 to a Danvers house called Brown’s Orpheum, operated by Louis Brown.

However, various issue of The Film Daily from 1926 and 1927 say that a house called either the Danvers Theatre or the Elm Theatre in various items was destroyed by fire in 1926, and was replaced by a 1000-seat theater which was originally to have been called the Capitol (issue of January 9) but which opened as the Orpheum (issue of February 9.)

The owner was Louis Brown, presumably the same who was the operator of Brown’s Orpheum in 1916, so it seems likely that the house destroyed by fire was the original Orpheum using a different name. A 1922 directory of New England businesses lists only one theater for Danvers, that being the Elm, though its address was 12 High Street. Mr.Brown might have acquired extra frontage for his rebuilding project, or perhaps simply shifted the theater entrance to a different part of the lot.

Auction site WorthPoint was recently offering a movie program from the Orpheum Theatre in Danvers for the week of October 20, 1940. The house had three changes a week at that time. The Orpheum is also mentioned in a 2011 article about the 50th reunion of a local high school’s class of 1961, and the author mentions attending the Orpheum during his high school years, so the house probably operated at least into the early 1960s.

The Theatre Historical Society archive in Illinois has the MGM Theatre Report for the Orpheum in Danvers. Says it’s at 20 High St., is in Good condition, has 800 seats and has been showing MGM product for over 10 years. There is an exterior photo dated April 1941.

The 1927 Film Daily Yearbook lists only two theaters in Danvers: the Danvers Th. and the Elm Th., but there is no info next to the theater names. The 1927 population of Danvers was 11,100.

I suspect that there was only theone theater in Danvers, and when Bown changed the name from Elm to Danvers sometine after 1922, FDY just never cleared its records of the old name. The Film Daily itself refers to the burned house as the Elm twice and as the Danvers once, but Motion Picture News only refers to it as the Danvers Theatre.

The fire in Danvers was reported by Motion Picture News on March 13, 1926, in this item:

“The Danvers Theatre, Danvers, Mass., destroyed by fire early in the year, is to be rebuilt at once. Plans have been prepared and contracts will all be let within the next few days for the structure. Louis Brown of Danvers is the owner and will manage the house. It will be 70 by 100 feet, will contain but one floor, no balcony, and will cost about $75,000.”

Another item appeared in the April 10 issue of the same publication:

“Louis Brown, owner of the Danvers (Mass.) Theatre, which was destroyed by fire early in the winter, has awarded contracts to William A. Berry of Boston for the immediate construction of a new theatre in that town. The structure will occupy the site of the former theatre and will be ready for occupancy, early in the fall.”

The Film Daily had reported the fire earlier, in a brief item in the January 21 issue:

“Danvers, Mass. — Loss estimated at $70,000 was caused by fire which started in the boiler room of the Elm, following an explosion.”The March 30 issue of the Daily had a rather extravagant estimate of the cost of replacing the theater. I suspect that somebody mistakenly added an extra zero:

“Danvers, Mass. — The Danvers theater is to be built by Louis Brown to replace the structure burned during winter. The work will cost $850,000.”The September 4 issue of Motion Picture News noted delays in the project:

“Work is being pushed forward on the new Danvers Theatre in Danvers, Mass., which will replace the one destroyed by fire in the early summer. Manager Brown had hoped to occupy it the early part of September, but it may be a month later before it is ready. Meanwhile, the programs are being given in the Peabody Institute Hall, a few blocks distant.”

Louis Brown did not fare well during the depression. The January 17, 1931, issue of The Film Daily reported that he had filed a petition for bankruptcy. Later issues of the magazine indicate that the Orpheum was then taken over by Allen B. Newhall, operator of the Union Hill Theatre in Gloucester.

In the 1942-43 Motion Picture Almanac, the Orpheum in Danvers is listed under Graphic Theatres of Boston.

I remember riding by it a couple of times as a kid. The info above says 20 High St. and that could be right but I recalled it further past Danvers Square on Maple St. It was probably about 1957 so I may be wrong. What I do remember is the signage above the street doors saying: CinemaScope – The Miracle You See Without Glasses! At around age 7 I was reading well enough to digest that phrase and hang onto it. Never got inside. I came from Salem, next town over and spent my childhood in the Paramount, Plaza, and ‘New’ Salem theaters. Later worked in a couple of ‘em.