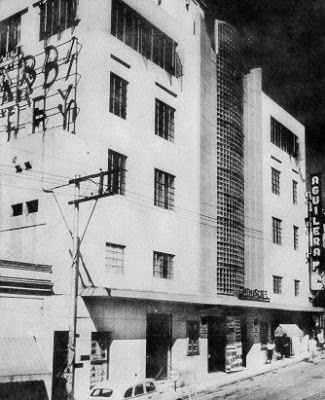 Located in Santiago de Cuba in the southeast of the island. The Cine Aguilera was a large cinema that was operating in January 1959. It was named after Francisco Vicente Aguilera y Tamayo.

Cine Aguilera, burned in the 60’s, it was never repaired.

It was the bigger theater in Santiago de Cuba with more that 2000 seats.

Hi – this theatre belonged to my family prior to the rvolution. I am workign on a family history and would love any information about Cine Aguilera or any of the other cinemas in the Botta chain.

bottam, the Aguilera movie theater opened in 1915, was called “the theater of flowers”, it was owned by the Compañía Exhibidora y Comercial Botta, of the brothers Armando, Carlos, Mariano and Enrique Botta. They also owned the Rialto, Martí, Maceo, Victoria, Estrada Palma and Capitolio. Although the Aguilera had the largest seating capacity in Santiago de Cuba, after it burned down in the 70’s, the provincial government said it was going to build a theater 10 times more beautiful, but they later made a park and not mentioned it again, it was erased from history.

guarina thank you so much! I have found some more information on the Botta family. The owners of Compañía Exhibidora y Comercial Botta were my great uncles – my grandfathers brothers.

Bottam, I am one of the grandsons of Enrique, who together with Armando and others, had the Cadena Botta which went on to become the Teatro Aguilera. I am also researching our family and have a good amount of information.