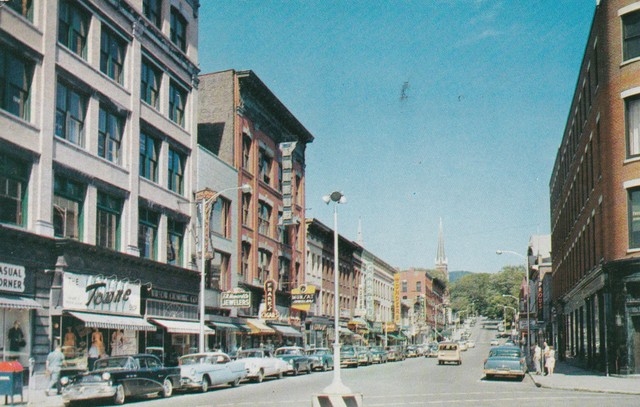 This beautiful downtown vaudeville playhouse built in 1913-14, originally seating 1,000, the Playhouse was opened on January 15, 1915.

Originally, the town of Rutland sat on the rail line connecting Boston and Montreal, and was a benefactor from the top name talent that would stop to play this house while making the trip.

When built, this venue was said to have been one of the finest in the country.

It was used as a movie theatre as part of the Paramount New England chain from June 29, 1931. On August 9, 1972 it became The Movies which closed in 1981. The building fell into disrepair, until a community grass-roots campaign spent 10 years during the 1990’s raising the funds to buy the building and restore it to opening day splendor.

The restored building initially had no projection equipment and was exclusively used for live performances.

The theatre had many innovations for the day. Interestingly, the theatre was essentially considered fireproof, including the original Dubarry rose tapestry that covered the sidewalls. (The tapestry fabric has been remade for the renovation by a New York company, matched to original.) The building also had automatic sprinklers installed as an original feature.

A beautiful theatre which after many years I finally got see inside.
I first discovered the Rutland in 1989. It was closed and so was the other theatre (see Strand, Rutland Vt., which I’ll submit after completing this comment) around the corner. The downtown area of Rutland at this time was bleak but it looked like things were beginning to happen. A walkway behind the theatre had been gussied up with interlock and old style street lights installed. The day I was there no one was around except two “kids” trying out their skateboards on the new interlock. The rebirth of the Paramount and the opening of much previously empty retail space has brought life back to downtown Rutland. Unfortunately, a tight restoration budget forced the Paramount to skimp on air conditioning. A Rutland native told me the theatre has no air conditioning and he attends no summertime functions. Well, I’m sure eventually the air will be up and blowing.

In its final years as a movie house, this theatre was simply called “The Movies”. The Grand Theatre, located a block away, finished its days as a moviehouse known as “Movieland”. Both were operated by Cinema North, which currently has the Plaza 9 in Rutland and the Westway 4 in West Rutland.

In the 1942-43 edition of the Motion Picture Almanac, there is a long list of theatre circuits in the US and Canada. The Paramount in Rutland is listed under the M&P Circuit (Mullin & Pananski) of Boston, which was affiliated with Paramount. According to the list, M&P controlled 5 theatres in Vermont, the Paramount, Grand and Strand in Rutland, and the Paramount and Magnet in Barre.

Saw this theatre last week on a cycling trip. Great downtown and the theatre fits right in with all the filled up storefronts. The Indigo Girls were playing the night I was leaving.

What goes around comes around,Movies again at the PARAMOUNT.

I attended a show at the Paramount last year. It is absolutely beautiful!

From the 1940s a photo postcard view of downtown Rutland along with the Paramount Theatre on Center Street.

The Theatre Historical Society archive has the MGM Theatre Report for the Paramount; it’s Card # 588. Address is 30 Center St. There is an exterior photo taken May 1941.The condition is Good. The house was over 15 years old and was showing MGM films. Competing theaters were the Grand and the Strand; the latter was closed at the time. (no mention of the Colonial). Seats: Orchestra, 488; Balcony, 415; Boxes, 42; Total-945. The 1940 population of Rutland was 17,000.