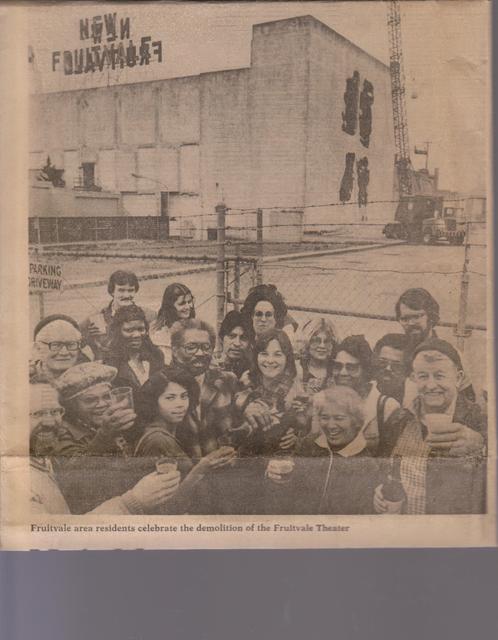 This neighborhood theatre opened November 28, 1925 with Monte Blue in “Be Respectable”. It was easily recognizable by its New Fruitvale roof sign.

The interior decoration was in a Venetian Gothic style.

The theatre was closed by fire December 22, 1968 and remained boarded up until it was finally and sadly demolished in 1979.

I would drive my grandmother, all the way from San francisco, to the New Fruitvale. In the early 60’s the Fruitvale was the only theatre to show Portuguese Movies, and they showed them on Wednesday nights. We sat in the loge section, and had to pay extra to sit there. I remember how cold it was in there, I don’t think they turned on the heat. While you were sitting, when the usher walked new customers to their seats, the loge would shake a bit. Saw “The Tingler” in there, and the scene where the Tingler was in the movie theatre when Vincent Price yelled to scream your guts out, they turned all the lights out in the auditorium, it was pitch black and everyone screamed it was great.

i grew up in the fruitvale district but Unfortunately this theater was torn down when i was only 2 years old my mom told me a little bit about this theater it sounds like it was a great treasure tobad i never got to know it . i know where it once stood on the corner of 37th ave and e14th st now internatonal blvd it,s a housing appartment for low income people and also a shell gas station ..

Actually the Shell gas station was adjacent to the New Fruitvale; it was there when the theatre was. Only the housing project replaced it.

…meaning (in other words), the housing replaced the New Fruitvale; the gas station itselfs was adjacent to the theatre for years.

heres a 1944 picture of the new fruitvale theater ..

The Fruitvale had this man working there that would stand in the lobby, hands behind his back, walking around like a gestapo officer, yelling at the kids, watching the people working the candy counter like a hawk. The minute I set eyes on him I knew there was going to be a problem. During the day, the afternoon sun would hit right in the front of the theater, and when people opened the door to step into the auditorium, sunlight would briefly flood the right part of the screen and the wall. I went downstairs and asked this guy if he could close the inner doors in the lobby to keep the sun out, and he said very curtly “no”. When I asked him why, he said to come during the evening if the sun was a problem. That made me mad so I went back up the stairs to go to my seat, and he yelled at me to slow down. I went to the usher of the loge, and asked who I could complain to, she even admitted he was a jerk, and she gave me a phone number to call. So I went to the phone booth, and called in to complain. I don’t know what happened, but the sun didn’t shine in anymore that day, and on my way out, he glared at me, and I called him an asshole. Went there many times after that, but never saw him since. Saw all the Elvis movies there and we would walk to the Percolator Coffee Shop for something to eat afterwards. Try walking that distance there now at night!

According to “The Encyclopedia of the American Theatre Organ” pg. 628, the New Fruitvale Theatre in Oakland had a two-manual, seven-rank Smith theatre pipe organ installed in 1926.

Does anyone know what happened to it?

Does anyone know the date in Dec 1968 that the Fruitvale Theatre caught fire? Thanks