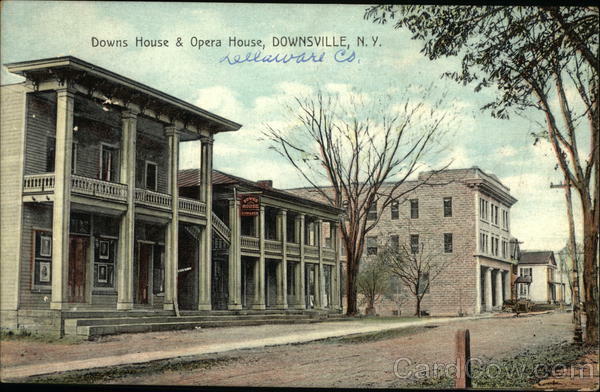 The Downsville Opera House was opened in 1907. It was originally built for live performances and was still being used as such as late as the mid-1930’s, while also serving dual use as a movie theatre from the teens onward. A town supervisor died in the projection booth in 1945 while repairing a broken film.

The Opera House, along with the local bank, phone office, drug store, and American Legion meeting rooms which were housed in the building, was destroyed by fire on Saturday, January 22, 1949. The ruined walls were considered a safety hazard and the owners of the building placed an advertisement in the Oneonta Daily Star in August 1949 to demolish the ruins of the theater.

After some deliberation, local interests raised money to purchase a quonset hut garage to convert to a replacement theatre. This effort was successful and the new Downsville Theatre opened in 1951.

The Colchester Historical Society website (which also has pictures of the interior and exterior of the Opera House) states that the Opera House was located on the site of the present-day fire station. Because of multiple street names in Downsville it is hard to pinpoint the exact address, but it is findable on street view in google maps.