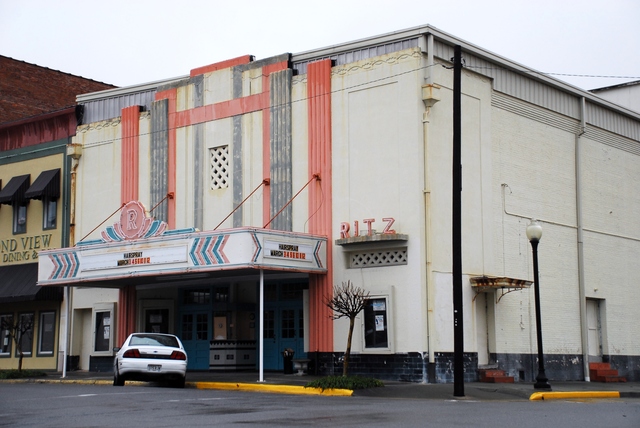 Opened in June 1913, as the Grand Theatre, a vaudeville, opera and live performance theatre under the management of Fred Brewer. By 1914-1915 it was also screening movies.

In 1917, its name was changed to the Orpheum Theatre, and continued to be used for vaudeville and live performance and by 1934 was operated as a movie theatre by United Theater Enterprises Inc.

Taken over in 1935 by Lucas and Jenkins, a subsidiary of Paramount Pictures Inc., extensive interior and exterior renovations were made by noted Jacksonville, Florida Art Deco architect Roy A. Benjamin. The theatre was renamed the Ritz Theatre and and is noted as “South Georgia’s finest theatre” and pledges to run first run films only. It continued as a movie theatre until 1977.

In 1986, the Ritz Theatre again returned to the performance arts when Waycross Area Community Theatre purchased the building for live community theater productions.

On April 11, 1977, the Amusement Company (L. B. Harrell) gave the Ritz Theatre, the Dianna Shop property (now known as the Pondview Bed and Breakfast),and the Carver Theatre (Oak Street) to the South Georgia Home for the Aged, Inc. The Ritz Theatre building was returned to The United Theatre Enterprises (formerly known as the Amusement Company) on February 24, 1986. The last movies were shown in 1984. On May 6, 1986, the theatre was purchased by the Waycross Area Community Theatre. The building was always a theatre and was never used as a home for the elderly. (information from deeds recorded in the Ware County Courthouse, courtesy of Judy Williams Nation)

According to Bowers' “Encyclopedia” pg. 551, there was a “Palace” theatre in Waycross that had a Reproduco organ made by the Operators Piano Co. I could not find the page for the Palace so I am putting this here for the time being.

“LIKE A CROW ON A JUNE BUG”,filmed in Valdosta,Ga.almost the next town over,opens at the RITZ. Rated R with Mercedes McCambridge starring with a bunch of no names.

A few years ago I was traveling through Waycross and stopped at the Ritz and went it. It was being rebuilt on the inside as the roof had collapsed unexpected. The auditorium was being retrofitted for stadium seating. The gentleman that was in charge told me about the theatre and also gave me instructions on how to get into the old Lyric theatre around the corner (he worked for the police department). Took his advice but was unable to succeed in geting into the building.

The Grand was one of four movie theaters listed at Waycross in the 1914-1915 American Motion Picture Directory.