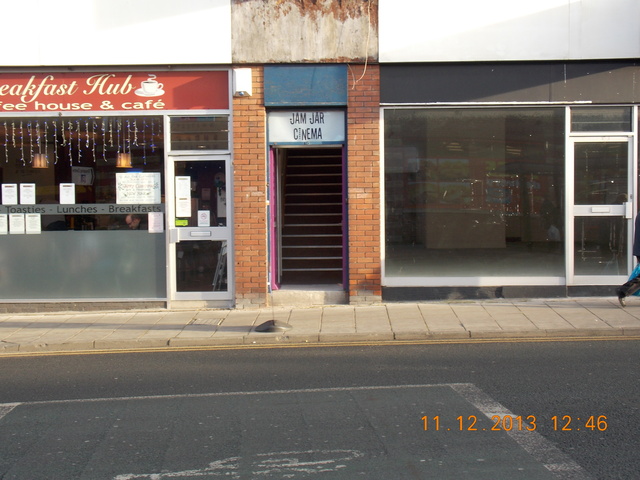 Located in the seaside town of Whitley Bay, to the north of Newcastle upon Tyne. The 50-seat Jam Jar Cinema is a community based cinema, which opened in a former derelict Job Centre building on 14th September 2013. In 2019 two more screens with 29-seats & 38-seats were added.

When I visited, in October 2016 for a screening of “Life on the Road”, starring Ricky Gervais, I was given a very warm welcome by founder Dan Ellis and his colleague Barbara. Dan was inspired to set up this not-for-profit, community interest company-run cinema when he noticed that people were having to travel some distance away from the town to the cinema. The Jam Jar Cinema, on the first floor of a former Job Centre, is certainly staffed by enthusiastic volunteers. There is a very pleasant bar/lounge. In the auditorium, the original 42 previously-unused Odeon ‘Premier’ seats have, since opening, been joined by four two-seater settees across the front, increasing the capacity to 50. With such a relatively small capacity many screenings sell out. There are also accessibility issues, as the only way up is via a steep flight of stairs. For these reasons, Dan is on the lookout for larger, more accessible premises. However, in the meantime, he and his team are doing a super job, and I wished him every success.

Further to my Comment, I am delighted to report that funding was secured in early 2019 for an extension of this very popular cinema at its original location. Work began in July 2019 on the creation of two new screens, in adjacent vacant space at first floor level, in addition to a much-needed lift, and a new bar. Screen 2, with 29 seats, opened on 18th September 2019, and Screen 3, with 38 seats, followed sometime before Christmas. It is wonderful to see this cinema doing so well.