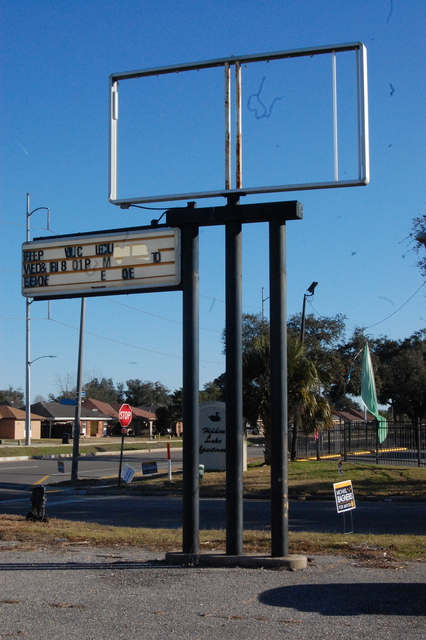 The Kenilworth Cinema was opened as a single screen by Ogden-Perry Theatres, Inc. on August 13, 1969. It was twinned in the mid-1970’s. Ogden-Perry divested itself of the theatre in 1982. It closed in 1991 due to problems with the roof.

As of January 2014 this theater was still standing, as my pictures would attest. It is vacant, however.

This cinema’s lobby, for some reason, had a recliner next to the box office where the ticket-taking usher would sit. Most unusual feature I had ever seen in a movie house of any sort.

I worked here from Day One, and was present at the ribbon-cutting ceremony with Mayor Vic Schiro. Originally and for many years, the “box-office was located just inside the main door. At first there were tickets and a ticket-taker named Joe. But after about six months a turnstile was installed, eliminating that position. (Joe stayed on part-time doing inventory.) The manager, Earl "Jerry” Perry told us kids: “OK, so the pay isn’t so great ($1.°°/hr.) but you can have all the free popcorn and Cokes you want, and you can let your friends in for free.” Now that’s MY kind of job!

Kenilworth was built as a single-screen neighborhood theatre. There were many reasons for the theatre not succeeding then: the early Seventies was not the best time for the movie industry, the trend was to multi-screen mega-theaters, and neighborhood theaters were closing up everywhere. Yet we brought in the people! (At least while I was there.) I returned periodical to take in a flick, and it was doing well. I stopped going when they retro-fitted it to a two-screen job, just like they did to the beautiful Sænger in downtown New Orleans

My first movie I saw at this theatre was Gremlins back in 1984.

Was the theatre was also owned by Golden Crest Theatres