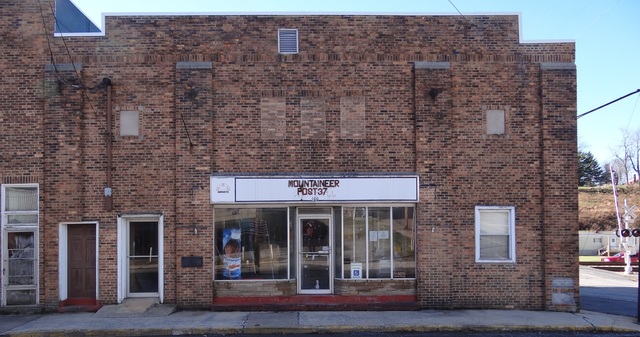 The Alpine Theatre was open in 1934. Seating was listed at 225 seats. It was operated by Alpine Theatres who operated a number of theatres by the same name in small West Virginia towns. The theatre closed in the late-1950’s. The bulding housed a country store and gift shop. By 2017 it was in use as an Am-Vets hall.

In 1935, Terra Alta was the location of the Alpine Theatre Circuit’s main office, but by 1936 it had been moved to Kingwood, where it remained as late as 1958.

The Alpine Theatre Circuit declined rapidly in the mid-1950s. In 1953 it still had 27 houses, but by 1956 it had only nine (probably reflecting the high cost of converting theaters for CinemaScope.) In 1958 the chain was down to six houses, and by 1960 it was no longer listed in the FDY.

It sounds as though this house was called the Alpine before it was owned by the Alpine Circuit, which as near as I can figure was formed in either 1934 or 1935. It’s likely that this theater gave its name to the circuit, rather than the other way around.

How sure are we on the address. This building really doesn’t look like a theater, and it’s oddly located at one edge of town. There is a building at 100 E Washington which was definitely a theater, then city hall, now Amvets. No streetview available, but it’s the building on the SE corner of the intersection of Washington and Main.

Unless odds and evens were switched at some point, the address must be wrong. The house next to the ‘theater’ is 207. No room for it to have been across the street, the lot isn’t deep enough. Looking at the side of the newer section of the building, it isn’t very deep, and has a lot of windows. If one of that complex is the theater, it has to be the older wooden building on the corner, which is much deeper.

The Alpine Theatre in Terra Alta was for sale at auction in 1958, and the advertisements for the auction said that the 285-seat theater was in a “[l]arge brick building on a corner lot located in the main business section of Terra Alta….” so yes, the address we have must be wrong.

I think it has to be the building at 100 E Washington. Very obviously used to be a theater. Wish streetview went there, but here’s my picture: https://tinyurl.com/yby33nbr (and no, for some stupid reason I didn’t get a picture of the cornerstone).

Clickable link. I think you must be right, Seth. The building definitely looks like a former theater, and fits the description in the 1958 auction ad of a large brick building on a corner lot. AMVETS Mountaineer Post 37 is mentioned in a few articles in The Preston County Journal, but the newspaper’s archive web site isn’t working right now. I’ll try checking it again later to see if any of the articles mention anything about the building.

It looks like AMVETS moved into this building in 2001. The October 31 issue of The Preston County Journal said that the organization would hold its first Veterans Day program in its new home on November 11, with a formal dedication of the new facility following.

The Alpine Theater in downtown Terra Alta is under new ownership. The floors at the Alpine Theater were leveled and transitioned to office space for the new city hall for Terra Alta. The building on the site of 100 E. Washington Street was originally designed with large cables that could change the elevation if necessary for the theater. The walls were not attached to the floor. Since the transition from theater to office building, there is three permanent floors and no ability to show movies any longer. There is still a projection room and refreshment stands upstairs and down but none of the necessary infrastructure to show movies. The new owner may place a sign in front (Marquee) to make it look like a theater so there can be an appreciation of where the old theater was.

The new owner of Terra Alta’s Alpine Theater would really like to see any old photographs of the theater in Terra Alta. Photos can be sent to : Thanks so very much !!!