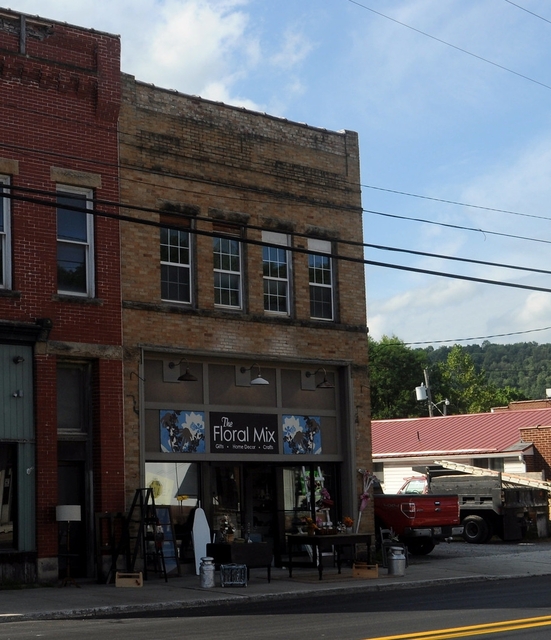 Opened as the Grand Theatre by September 1918. It was renamed Belington Theatre in October 1938. By April 1940 it had been renamed Seneca Theatre. Seating was listed as 240. The Seneca Theatre was still open in 1961.

The building is in retail use by a florist shop named Floral Mix.

This house was mentioned as the Seneca Theatre in the January 24, 1945, issue of The Film Daily. It had just been sold to C. F. Sanders by John Panapoulos.

A Belington movie house called the Grand is mentioned in the January 15, 1928, issue of the same publication, and I’ve found a Grand Theatre mentioned in The Moving Picture World as early as September 14, 1918. I don’t know if it was the same theater that later became the Bellington/Seneca, or a different theater. The Seneca’s building does look old enough to have been around in the 1910s or even earlier.

The Seneca Theatre was still in operation at least as late as 1961. A recap of events in the Pittsburgh area that year in Boxoffice of January 8, 1962 noted the sale of the Seneca at Belington to George Everitt by former owner Dan C. Hayman.

Adding to Joe Vogel’s note, the April 23, 1934 Film Daily wrote that the Grand had been transferred to E. T. Schnur by Jim Rocco and W. V. Woodford.

Boxoffice, Oct. 1, 1938: “John Panopoulos, former New Cumberland, W. Va., exhibitor, was a (Pittsburgh) Filmrow booker the other day, reporting that he has opened at his new stand, the old Grand, at Belington, W. Va., which he has named the Belington”

The Dec. 10, 1938 Motion Picture Herald, in a roundup of equipment purchases, noted that “John Panopulous” bought new sound tech for the Grand.

Boxoffice, April 27, 1940: “John Panopoulos, Belington, W. Va., theatre owner, is remodeling his apartment on the second floor of the Seneca”