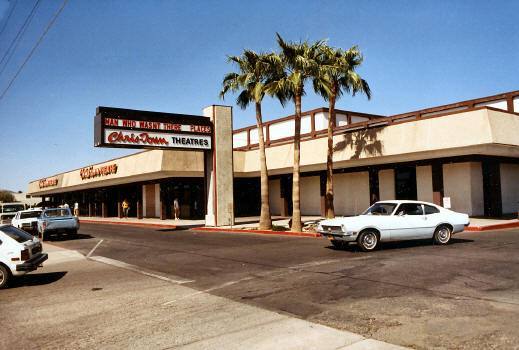 This is part of an outside mall multiplex built in 1967 and opened as a single screen theatre. The Fox Chris-Town Theatre expanded to a twin screen theatre on December 25, 1970. It was expanded to five screens in December 1976 and to eleven screens in November 1996. The main 922 seat auditorium is quite massive and was Phoenix’s first THX theater.

“I remember seeing "Superman" and a host of 1980’s blockbusters here. The only down side to this auditorium is that the screen is far too small.”

Of the the numerous movie theaters I have frequented over the years of my life, Chris Town Theater is the one frequented the most frequently. I was raised in Phoenix but am now living in Northern Arizona. I just learned that the theater has been demolished and it is sad because so many great memories are tied to this theater. I guess it’s true that all good things must come to an end.

I remember this theater and mall well from my youth. We used to come to this theater to see many movies in my high school days. I remember seeing Friday the 13th part 3 3D and Rocky movies in the HUGE auditorium. I was in awe of the sheer size of the place. It was awesome. Now, almost all of the theaters I went to in my younger days and the old , big movie houses and malls are gone except for the Valley Art theater in Tempe. As a movie buff and a history teacher, I hate the fact that AZ does a terrible job of preserving their historic buildings and our past, in the name of progress. Maybe someday, we will. At least we still have the Orpheum.

I used to be a Doorman for this theater in high school, 1979-81. Mr. Griffith was the manager and he came from the Fox Theater in downtown Phoenix. He was a Doorman and Usher back in the 30-40’s and he was close to being in his 70’s or 80’s back then. I’ve seen a photo of him as a kid and he looked the same. We had a man named Larry that made popcorn all day and I think he was either a genius or a moron, he was in his 60’s. Many of my friends worked there, Robert Rosell, Tim the Karate dude and David Butterworth, a couple of hot girls including the best of all time and I should have snagged, Christine Holland. Love’s Restaurant was next door, a great BBQ place. We were robbed several times, including twice by the same gang. They claimed to have a sniper across the street, they worked over Larry and ran out the back door. There was a special hatch on the roof and the police would watch for car thieves, I’d go up there to hide and kiss the girls. The Elephant Bar was across the street and we would get drunk and eat at Peter Piper Pizza. Back then you could drink at 18 years, so that meant you could drink at 16. I could tell you several good stories but I would get in trouble. We often would allow other theater employees to watch movies for free back then. There were days of glory and I had a blast. There were many celebrities and stories behind the scenes back then. The main theater had lots of props and novelties from former movie events, like from Wallace and Ladmo. Thank you Lila, Mr. Griffith, Russ and everyone that was kind to me. Thank you to all the pretty ladies that worked there too. I had it made and didn’t know better. Jeff Durbin, Paris France

The August 30, 1971, Boxoffice article about the addition of a second auditorium to the Chris-Town Theatre, which I cited in an earlier comment, can be seen online at this link. From the photo on the first page of the article, as well as various parts of the text, I get the impression that the Chris-Town 1 and Chris-Town 2 didn’t share any common areas inside, though the article never explicitly says that this was the case.

My brother and I would spend every Saturday here at the Wallace & Ladmo show, eating candy, hoping to get a prize and watching the movies after the show.

I’m passing along the link to a new historical article about large format and roadshow presentations at this and other Phoenix area cinemas.