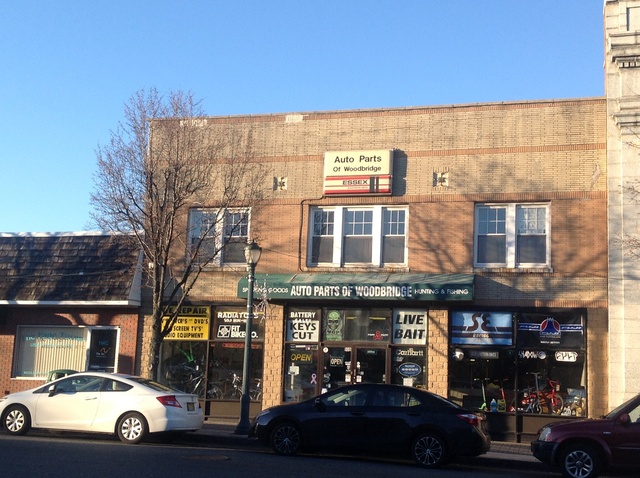 The Woodbridge Theatre opened in 1921. It closed in July of 1927, shortly before the much larger State Theatre opened a few blocks down Main Street. The building is still standing, currently housing an auto parts store that also deals in sporting goods and television repair.

When you drive around back, you can still see the old stagehouse where the screen would be stored if a stage show was going on.

I just uploaded a couple of pictures of the former Woodbridge Theatre which I took while I was in the area last month, including one from the rear that shows the fly loft. While it is not that deep, I imagine it had a few other line sets to hang drops on. I believe the ventilation system visible on the roof dates from the building’s early days. You can still see portions of the original tin ceiling exposed near the back of the store, though the public area doesn’t extend to where the stage once was.

I’ll upload a few old ads in the near future, along with a brief history.

Yesterday (November 16) marked the 94th anniversary of the Woodbridge Theatre opening its doors. While no bill was given, a newspaper report from the neighboring borough of Roosevelt (now Carteret) reported the show was a sellout, with 400 people turned away.

The theatre was built and operated by Stanley MacIntosh. MacIntosh had started as a performer in both vaudeville and dramatic presentations before getting into theatre management/ownership and had previously operated theatres in neighboring Rahway and later Metuchen.

As mentioned previously, the Woodbridge was open slightly less than 6 years. In that time it had three operators after MacIntosh. I’ll update this shortly to cover them and some of the events associated with the WT, along with a couple of ads, including one from its first week of operation. It won’t take another 22 months, I promise.

Today is the 96th anniversary of the Woodbridge Theatre opening its doors, I’ve uploaded an ad from that week’s (November 18th) Roosevelt News advertising the “New Woodbridge Theatre” to the residents of Roosevelt and inviting them to “take the bus to Woodbridge” Roosevelt is now known as Carteret.