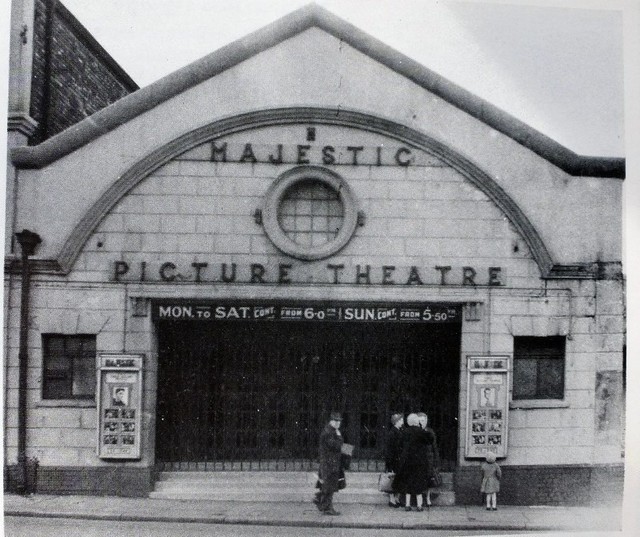 Located in the Patricroft district to the west of Eccles, in today’s Greater Manchester. The Patricroft Picturedrome opened on 19th November 1912 with 400 seats, all on a single level. In 1915 it was re-named Majestic Picturedrome.

In January 1920 it was sold to Lancashire Entertainments Co. Ltd. and was enlarged to 850 seats with the installation of a balcony. It had a 20 feet wide proscenium. In September 1929 it was equipped with a Western Electric(WE) sound system and screened its first ‘talkie’ “Strange Cargo” starring Lee Patrick. The Majestic Cinema was closed on 4th April 1959 with Richard Todd in “Intent to Kill”.

It later became the Majestic Ballroom, and in 1963 pop group Freddie & the Dreamers appeared here. In 1965 it became the Talk of the North nightclub & casino, attracting stars such as Tom Jones & Shirley Bassey. It was later destroyed by fire.

It was rebuilt in 1984 becoming Randy’s Fun Bar, which had a transvestite DJ spinning the records. It had closed by November 1986. It has since been demolished.

The ‘Majestic Ballroom’ became better known to all its clientelle as The Majestic Club, or just ‘The Majestic.’ The original stage and proscenium were used, with the raked flooring levelled. The stage front was fitted with a full width Run-Out. This was manually operated, by several burly doormen dragging it out on castors. Thus it could switch from disco to cabaret. It was so popular that the nearby youth club gave its success as the reason they were forced to close, due to lack of support.

Refitted, as a proper cabaret club, by Joe Pullen and Fred Talbot, it began to book increasingly up-market acts. Initially it served snacks, including the usual ‘Chicken in a Basket’ to fulfill the licencing laws, but there were ambitions to convert it to full dinner-club format. To achieve the refit it became necessary to close for a while. To maintain income, during this interim period, the business was transferred temporarily, to the nearby skating rink, close to the Palladium Cinema. The rink was renamed the Rainbow Rooms.

When The Talk of the North reopened, the old proscenium and stage were gone. Tiered seating, with tables, were arranged around the three sides of a large hydraulic, Thrust Stage, on the left-hand side of the main room. This stage could descend into the basement, where the dressing rooms were situated, and rise up complete with bands or acts ready to perform. Certain areas of the stage could also rise to different heights, to form steps and rostrums. It could also be made fully flat for disco dancing. Certain areas of the building did remain hampered, however, by some aspects of the original cinema’s architecture. One night, it burned down and, for reasons of safety, it was demolished except for about fifteen feet of the original perimeter wall. The front wall, complete with boarded-up doors, windows and announcement boards, remained a sad reminder for several years, pending rebuild. When ‘The Talk’ was finally rebuilt, it was the club it should always have been, but it was too late. The scene had moved on and the business never recovered its former glory. In 1984, as stated, it became Randy’s Fun Bar and Disco. It closed for good two years later.