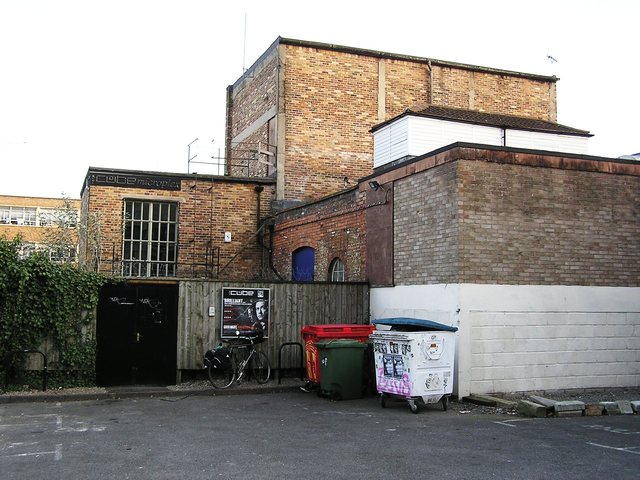 Located in a building with its original entrance at 7 Kings Square, it became the Arts Centre in 1964. Seating was originally provided for 150. It was founded by William & Jean Poeton, who encouraged the staging of new plays and rare revivals. Films were also screened from 1966 and it was eventually named Arts Centre Cinema. It closed suddenly in January 1998 when allegedly, the owner ran away with the money.

Re-opened as the Cube on 2nd October 1998, it is a Microplex cinema, arts venue, adult creche and progressive social well-being enterprise in central Bristol. It was formed in 1998 by 4 artists who had no idea what they were getting into. Idealists, amateurs, fools, material positivists, stilt walkers, film directors, screen writers, occultists. But not even running illegal cinema speakeasy events in Bristol (Club Rombus) could prepare them for the monster they gave birth to one cold and rainy October evening in 1998. The building until that point in time had been a glass recycle depot, an am-dram theatre, a gay avant garde 70’s art centre, an extension of the Chinese Overseas Association, a girls school, a deaf and dumb institute, a second run family cinema, a secret gig venue, an illegal gambling den. All these ghosts hang on in there.

The am-dram group who once occupied the space hand-built the wooden staging, racked seats and wood panelled walls of the auditorium and this DIY ethic is still the life-blood of the Cube. Every job needed to run this venue seven days a week is carried out by devoted volunteers who give up their time for the love of it. We are amateurs, but we resist the negative connotations of that word. The organisation runs as a not-for-profit worker’s co-operative.

The Cube has evolved over time. Older guests will remember entering via King Square past the kitchen of a Chinese restaurant. When that kitchen burnt down in 2001, we were closed down for a year, but reopened with a new entrance and a new garden, a small urban oasis where cigarette papers get swapped for a smile and a story. Volunteers have come and gone too. Some have fallen in love and had children, who now come to Babycinema screenings and Nanoplex kids workshops.

Our volunteers work hard at presenting cinema, music, cabaret, discussions, amateur film-makers nights, children’s events, performance art, comedy and other events that can’t easily be categorized. The money we make from these events funds the organisation. We get no external funding. We are truly independent.

We aim to offer alternatives and make a difference - in our programming and in the way we trade. We don’t sell Coca Cola - we make our own recipe cola. We don’t serve Nescafe - we ship feral trade coffee from Central America. We have sent volunteers to Haiti to screen films for earthquake survivors. We provide an internet server for Kingsdown. We are the cheapest cinema in town and always will be and if you’re an asylum seeker you can come in for free.

Come and visit soon us soon. You can buy a lifetime membership card - it’s the best £1 you’ll ever spend.

Good to see the old place is still showing Films. My first job was projectionist at the Arts Centre from 1969 – 1973 after I left College. At the time we were the only cinema in Bristol that could still show the old nitrate films on the old Kalee 21 projectors. I remember installing the wall lights in the auditorium which we removed from the coffee bar when it closed, I also did a fair amount of re-wiring in the projection box which was in a poor state when I joined. There were only four full time staff then. Reg Allsop was the general manager, Anne Godfrey in charge of film programming, Sonia running the box office, and myself showing the films and looking after the occasional small scale touring theatre shows we bought in. Happy days.

Amazing to see this comment from Paulnd. I’m Hogge, one of the original team that founded the Cube and took the cinema over from the Hagans. Also incredible to see your photos of the projection room from the 70’s. We’d like to invite you over to meet you and talk about your memories. We’d love to know if you have any other photos or memorabilia and/or know the wherabouts of Reg and Anne and others. Take care and hop to hear from you.

We’re in the process of renovating the Cube Auditorium & Stage at the minute, including replacing the screen and the old single Kalee 35 projector and going back to 2 x 35’s again, this time with Kinoton FP30D’s. As soon as we’re finished and the projection room no longer resembles a building site (!) i’ll get some pics from the exact same vantage points as yours above Paulnd, and post them on here. Those pics are just amazing… great to see we’re still using exactly the same tab controllers, and the old rewind room is finally getting a new lease of life again too!

Having visited with the Cinema Theatre Association in July 1999, I finally got to see a film in March 2017! Fortunately, it was well worth the wait, as I saw a stunning print of Powell & Pressburger’s “Black Narcissus”, starring Deborah Kerr and David Farrar.

I was made very welcome by the enthusiastic volunteer staff, who clearly operate the Cube as a real labour of love. The place has a wonderfully ‘independent’ feel about it, and I was delighted to sit with a near full house, a real rarity these days and a testament to the lure of a wonderful film in this lovely atmosphere. I wish all at the Cube all the very best. I only hope it’s not another 18 years before I return!